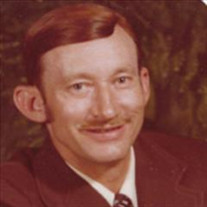 WILBUR H. MEAD, 85 of Julesburg, CO, passed away Thursday, April 5, 2018, at the Sedgwick County Memorial Nursing Home in Julesburg. Wilbur approached life with humor, compassion, and dignity. Born October 28, 1932, Wilbur was truly a child of the dustbowl. He was raised by his maternal grandparents, Eva and Thomas Jackson Roberts. He spent his earliest years on a farm in extreme southeastern Colorado. By the time he started school in Springfield, Co., he had had enough of dust and grasshoppers. He graduated from Springfield High in 1951, where he had made lifelong friends. The outstanding experience of his young life was attending the first post-WWII National Boy Scout Jamboree in Valley Forge, PA. The Colorado State Scouts chartered a train and took the state scouts on tours in Detroit, Chicago, Niagara Falls, New York, Washington D.C., and Philadelphia. Imagine the excitement of the small town boy carrying a bag of horney toads for trade exchanges. He was a proud Eagle Scout who later became a scoutmaster. While at Lamar Junior College, he met and married Marylee Katherine Williard and had two daughters. Wilbur went on to graduate from Lamar Junior College and Adams State College. He also studied science at UNC in Greeley, Colorado, Lamar University in Beaumont, Texas, Vassar University in Poughkeepsie, New York, the University of New Mexico at Socorro, and the University of Utah. On Christmas of 1973, Wilbur was united in marriage to Janice Dail of Dyersburg, Tennessee. They made their forever home at 200 West Third Street in Julesburg. Mr. Mead taught science and leathercraft in junior high and middle school for 33 years, with one year as principal. With caring encouragement, Wilbur sought to inspire his students to use science to explore the world they lived in, but also to challenge them to do their best in whatever they chose to do; even to draw a neat, straight line on science drawings. Wilbur tried many innovative teaching techniques using chemicals, electrical contraptions, and even kite flying. He started Julesburg's first Rocket Club, going out of town for competitions and demonstrations. Wilbur took advantage of federal grant monies to acquire microscopes, celestial telescopes, and a wide variety of chemicals. He also received a grant to set up the first local dark room where many of the local historical photographs of Julesburg were enlarged and printed in this darkroom. Wilbur is best known in his community as the "Voice of the Lions." For 25 years he announced the plays at the football games as well as basketball and track. He also announced at dances and other events. Wilbur was proud to serve his community. He was instrumental in starting the credit union, now Co-Ne and the Julesburg Volunteer Ambulance Service. He was Julesburg's first certified EMT spending long evenings hours at NJC and weekends training at Denver General and Denver Lutheran Hospitals. After his retirement from teaching, Wilbur and Jan bought a storefront and turned their art hobby into a business. They bought a small motorhome and traveled from Montana through Missouri doing craft shows and exhibiting their wood art. They spent long weeks doing kiosks in shopping Malls in Wyoming, Colorado, and Nebraska. They even fulfilled mail orders. Wilbur and Jan liked to travel and visited all the states except Alaska and North Dakota. They also traveled in Mexico, Canada, and Europe. For the past ten years, Wilbur and Jan have volunteered at the Colorado Welcome Center. Wilbur said that this was the only job that he ever had where he could tell people where to go, how to get there, and what to do when they got there; and no one would be offended!! Wilbur was preceded in death by his first wife; his parents; and 2 brothers, Harold and Willard. Those left behind to cherish his memory include his wife, Janice; daughters, Ann (David) Bolser of Colorado Springs, CO, Lynn (Jeff) Biegen of Englewood, CO; grandson, Ian (Georgia) Bolser and their children, McKenna, Hunter, and Caroline of Manhattan, KS; grandson, Garrett Bolser of Colorado Springs; grandson, Adam (Jennifer) Biegen and their children, Danielle and Shia of Lafayette, CO; grandson Ryan Biegen of Chicago, IL; along with many other relatives and friends. In lieu of flowers, the family requests donations be made to the Wilbur Mead memorial fund to be used for a scholarship in his name. Condolences may be shared at prairiehillsjulesburg.com, where the service will be streamed live for those unable to attend. Services are **postponed** to Sunday, April 15, 2018, at 3:00 p.m. at the Julesburg United Methodist Church. Cremation will follow, with a private family inurnment to be at Hillside Cemetery in Julesburg at a later date. Visitation will be on Friday, April 13th from 1 p.m. until 7 p.m. at the Prairie Hills Funeral Home in Julesburg. Prairie Hills Funeral Home of Julesburg is in charge of arrangements.

The family of Wilbur H. Mead created this Life Tributes page to make it easy to share your memories.

Send flowers to the Mead family.