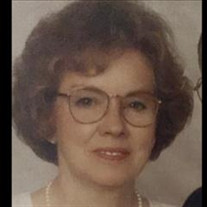 Vivian Lucille Wood, 92, of Julesburg, passed away January 10, 2022, at the Sedgwick County Nursing Home in Julesburg. Vivian was born on April 16, 1929, in Spencer, Nebraska, to Virgil and Augusta (Otto) Farlin. She graduated from Springview... View Obituary & Service Information

The family of Vivian Wood created this Life Tributes page to make it easy to share your memories.

Send flowers to the Wood family.