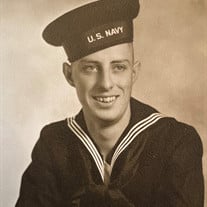 Vincent Wegman, 97, passed away on January 4, 2021, at the Sedgwick County Memorial Nursing Home in Julesburg, CO. Vince was born August 9, 1923, in Sedgwick County, Colorado, to John W. and Vida L. (Scott) Wegman. He attended school in the area before entering the US Navy in December of 1943, where he served in WWII. Following his honorable discharge in April of 1946, Vince returned home to farm with his dad, John, before eventually getting into carpentry, which he did the majority of his life. He worked on and completed many construction projects in and around the Julesburg area. Vince was married to Roberta Ruth Walline, and their union was blessed with three sons, John, Ron, and Lonnie. Following Vince's retirement, he enjoyed spending his time fishing. Vincent was preceded in death by his wife; son, John; and a sister, Maxine Bohmont. Survivors include his children, Lonnie of Julesburg and Ron of Sun City, AZ; five grandchildren and eleven great-grandchildren; as well as his sister, Wilma Beebe. No services are planned at this time. Condolences may be shared at prairiehillsjulesburg.com. Prairie Hills Funeral Home of Julesburg is in charge of arrangements.

The family of Vincent Wendel Wegman created this Life Tributes page to make it easy to share your memories.

Send flowers to the Wegman family.