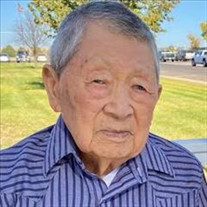 TSUGIO "TUGO" YOSHIMOTO, 97 of Sedgwick, passed away January 26, 2022, at the Sedgwick County Nursing Home in Julesburg. Tugo was born June 16, 1924, at Sedgwick, Colorado, to Hideichi and Hide (Toyota) Yoshimoto. He graduated from Ovid High School. Tugo's family farmed north of Sedgwick for many years. He was one of the last farmers in the county to employ a team of horses for his farming operations. He was proud of his farm and was honored when his beet crop was named one of the "High Ten" for Great Western Sugar. In 1949, Tugo married Elsie Sato at the Sedgwick Buddhist Temple. Tugo and Elsie were blessed with two sons, Leslie and Mark. Tugo fostered a great love for his family. He was deeply proud of his grandchildren. He enjoyed getting to know his great-grandchildren, and they were the love of his life. Another great love was fishing. He could often be found wetting a line at either Jumbo Reservoir or DePorter Lake. He loved to teach others to fish and had a great many "fishing" stories. He usually came home with fish unless he did not feel like cleaning them. Then back they went into the lake so that he could catch them again another time. Tugo took part in many community activities. He was a member of the Sedgwick Chamber of Commerce. He felt an obligation to help whenever and wherever he could. He sat on the Sedgwick Cemetery Board since it was only a mile from where he lived. He and Wally McClary made sure the cemetery was cleaned up before Memorial Day and took pride in the little cemetery. Tugo was also one of the founding members of the Sedgwick Volunteer Fire Department and served many years. He stepped aside when there were "enough of the younger people available" to maintain and grow the Department to what it is today. Tugo witnessed many things change throughout his lifetime, and through that journey, he carried himself with growing mindfulness and dignity. Tugo was preceded in death by his wife, Elsie; an infant son; parents; brother, Shigeo; a sister, Yoshiko and special friend Melpha Barnica. Survivors include his sons, Leslie (Marian) Yoshimoto of Sedgwick, Mark (Kathy) Yoshimoto of Brighton; grandchildren, Doug (Jenny) Yoshimoto of Brighton, Kaylee (Karl) Yoshimoto of Phoenix, AZ, and Stacey Yoshimoto of Commerce City; great-grandchildren, (Morgan, Abigail, Taylor, Elanor, and Adeline); along with many other relatives and friends. The family would like to give special thanks to Dr. Don Regier and the entire staff of the Sedgwick County Health System: Sedgwick County Health Center, Sedgwick County Assisted Living and the Sedgwick County Nursing Home. We appreciate all of your dedication to Tugo's care over the years. We would also like to thank his Hospice Nurse, Mary Hughes, for her compassion and care. A memorial has been established in Tugo's memory for later designation. Condolences may be shared at prairiehillsjulesburg.com, where the service will be streamed live. Services will be on Saturday, February 5, 2022, at 10:30 am at the Sedgwick Buddhist Temple. Interment will be in the Sedgwick Cemetery. Visitation will be on Friday, February 4, 2022, from 4 pm until 7 pm, at the Prairie Hills Funeral Home in Julesburg. Prairie Hills Funeral Home is in charge of arrangements.

The family of Tsugio "TUGO" Yoshimoto created this Life Tributes page to make it easy to share your memories.

Send flowers to the Yoshimoto family.