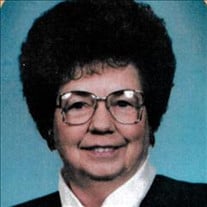 THERA JEAN ARMSTRONG, 89 of Holyoke, CO, formerly of Big Springs, passed away Monday, November 16, 2020, at Regent Park Nursing and Rehabilitation in Holyoke. Thera Jean, the second child and first daughter, was born to Theron LeRoy Mercer and Sarah Agnes (Mayberry) Mercer on October 8, 1931. She joined her older brother, Jack Thornton, in this young family. In subsequent years, two more children, George Evan, and Glennys Marie became a part of the family. Jean's parents and siblings have preceded her in death. The family lived on a small farm north of Big Springs, NE, where the older kids went to country school. After spending a short time on a farm south of Big Springs, the family moved into town, and all the kids now attended "town school." Thera Jean quickly became Jean or Jeanie within the family as she was not fond of her given name, even though it upheld the tradition of looking to older family members as inspiration for new babies' names! Family stories point to Jean's willingness to be active and helpful within and to the family. She tells of standing on a box to wash dishes at six years of age to help out at the Lincoln Cafe that her extended family was running. Jean, also known as Merc by now, graduated from Big Springs High School in 1949. She began working at the Goodall plant in Ogallala, NE, after High School. In 1950, she married Don Rickson, and to this union, a daughter, Vicki Ranay, was born in 1951. Having divorced in 1952, Jean was busy being the sole support of her daughter and provided transportation for several ladies to their workplace in Ogallala during the week. In September of 1954, Jean married Dean Armstrong, who had returned to Big Springs from his military service overseas. To this union were born a son, Jerry Dean, and a daughter, Lori Lynn. The couple lived and farmed north of Big Springs for several years. During her adult life, Jean studied Practical Nursing, real estate, and finance. She spent her working years at the Medical Clinic in Ogallala, NE, the Farmer's State Bank in Big Springs, NE, the ASCS office, in Julesburg, CO, and in her retirement years, at the Welcome Center south of Julesburg. She was energized by and loved working with people. She had a great love of dancing as evidenced by her megawatt smile when she was on the dance floor! More than anything else, she loved the grandchildren that began to come along later in her life. Luke Franson, son of Harold and Vicki, Cara and Lana Armstrong, daughters of Jerry and Jean, and Carson Craig, son of Lori and Les Ebke. They were her delight and joy for many years. In fact, their photos replaced her own children's photos in the place of honor on top of her dining room hutch! How she would have thrilled in knowing her great-grandkids, Conrad, Louisa, Felix, Grady, Josey, and Marrah. Please remember her as the joyful, giving person she always strove to be! A memorial has been established in her memory for later designation. Condolences may be shared at prairiehillsjulesburg.com, where a recording of the service will be posted. Private family services are being held on Friday, November 20, 2020, with a public graveside service at the Big Springs Cemetery at 11:30 am with Pastor Kristie Firme officiating. Prairie Hills Funeral Home of Julesburg is in charge of arrangements.

The family of Thera Jean Armstrong created this Life Tributes page to make it easy to share your memories.

Send flowers to the Armstrong family.