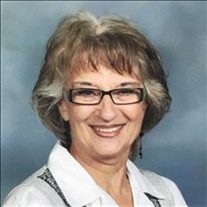 THELMA SANDQUIST, 72 of Sedgwick, CO, passed away Thursday, April 26, 2018, at Sedgwick County Memorial Nursing Home in Julesburg. Thelma was born October 20, 1945, in Sedgwick County, Colorado to John and Loretta (Schneider) Appelhans. She graduated from Sedgwick High School with the class of 1963. On June 30, 1963, Thelma married Glen Sandquist at St. Anthony's Catholic Church in Julesburg. The couple made their home south of Sedgwick for a few years before eventually moving to Ovid. In the late 1960's, Thelma and Glen moved to Sedgwick. Their union was blessed with two girls, Chris and Debby. Thelma worked for the Postal Service for over 35 years, retiring in 2008. Throughout that time, she served the majority of her career as the Postmaster in Sedgwick, as well as had interim duties at both the Post Office in Ovid, Julesburg, and Crook. She and Glen lived in their home south of Sedgwick where she much enjoyed gardening, landscaping and just sipping coffee on the deck in the early mornings. Thelma lived life with a vibrancy that people admired. She loved to travel, attend the Denver Theatre, spend time outdoors, run/walk, monthly events with her friends and participating in road races. Thelma especially enjoyed annual family gatherings--reunions, destination trips and camping at Lake McConaughy. Thelma had a servant's heart and always seemed to be caring for people. She was a volunteer at the Sedgwick County Nursing Home, baking goodies most Sunday's just to take them up to share with her lady friends. It was also a priority of hers to give back to her community. She was a member of the Sedgwick County Hospital Board for several years, President of the Sedgwick High School Alumni Association and an active member of St. Peter's Catholic Church in Crook, where she served as both a lector and Eucharistic Minister. Thelma was preceded in death by her parents; and brother, Rodney Appelhans. Survivors include her husband, Glen; daughters, Chris (Scott) Sandquist-Wolfe of Brighton, CO, Debby Sandquist-Perlinger of Paxton, NE; grandchildren, Brayden (Caitlin) Wolfe, Brodie Wolfe, Collin (Amber) Perlinger, Carrick, Aidon & Bennett Perlinger; great-grandson, Ryker Perlinger; along with many other relatives and friends. A memorial has been established in her memory with the intent to support the ALS Foundation and Hospice of the Plains. Condolences can be shared online at prairiehillsjulesburg.com. Mass of Christian Burial will be Monday, April 30, 2018, at 2:00 pm at St. Anthony of Padua Catholic Church in Julesburg with Father Mike O'Brien as Celebrant. Burial will be in the Sedgwick Cemetery. Visitation will be Sunday, April 29th from 1:00 pm to 3:00 pm at Prairie Hills Funeral Home in Julesburg, with a Rosary at 5:00 pm at the church. Prairie Hills Funeral Home of Julesburg is in charge of arrangements.

The family of Thelma Sandquist created this Life Tributes page to make it easy to share your memories.

Send flowers to the Sandquist family.