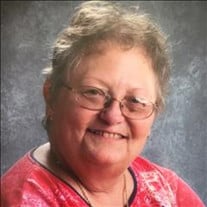 TERRY LEE SMITH, 68 of Ovid, CO, passed away Friday, November 15, 2019, at Sterling Regional MedCenter in Sterling, CO. Terry was born July 20, 1951, to James and Edna (Mihelish) Thomas in Craig, CO. She attended Moffit County High School and graduated with the class of 1969. Terry went on to attend the University of Northern Colorado in Greeley, Colorado, where she received her Bachelor of Arts degree in Acoustically Handicapped Education and her Master of Arts degree in Special Education. On February 28, 1981, Terry married Duane Smith at the Community Presbyterian Church in Sedgwick. The couple made their home in Sedgwick before eventually moving to Ovid, and their union was blessed with two daughters, Cody and Ashley. Terry's teaching career began at Lakeside Elementary School, a one-room schoolhouse in Lakeside, Nebraska, where she taught from 1975-1977. In 1978, she kick-started the special education program in the Platte Valley Re-3 school district in Ovid and Sedgwick, Colorado. Terry taught special education, working with students in Kindergarten- 12th grades over the years. She retired in 2012 after 34 years in the district. Terry loved her work in special education and was passionate about helping her students. She was patient and nurturing, mixed with toughness and confidence. She had a gift for connecting with kids and getting the best out of them. Terry was a gifted pianist and played for many years at the Community Presbyterian Church in Sedgwick, where she also taught Sunday School and Vacation Bible School. Terry had a vibrant personality gilded with a bit of orneriness, and she loved to tease people, to make them laugh and build relationships. Her approachable personality made it possible for her to connect with so many people. Terry made a difference in the lives of many, and she will be greatly missed. Terry was preceded in death by her parents and a nephew Shane Thomas. Survivors include her daughters, Cody Smith of Brazil, and Ashley Smith of Ovid; grandchildren, Caiden, Cameron, and Rylynn; a brother, Doug, and wife Lynette Thomas of Craig, CO; along with many other relatives and friends. A memorial has been established in Terry's memory with the intent to fund a special education scholarship. A memorial service will be held on Sunday, November 24, 2019, at 12:30 p.m. at the Community Presbyterian Church in Sedgwick with Pastor Larry Nail officiating. No interment of cremains is planned at this time. Prairie Hills Funeral Home of Julesburg is in charge of arrangements.

The family of Terry Lee Smith created this Life Tributes page to make it easy to share your memories.

Send flowers to the Smith family.