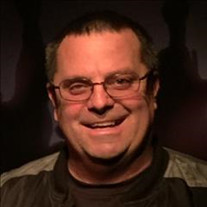 STEVEN COLLINS, 58, of Julesburg, CO, passed away Thursday, April 1, 2021, at Julesburg, CO. Steve was born December 7, 1962, in Julesburg, Colorado, to Charles and Janice (Kumm) Collins. He graduated from Revere High School with the class of 1981 before attending WyoTech, where he studied Diesel Technology. On April 2, 1982, Steve married Jacque Walline. The couple made their home in Sterling and Ovid before moving to Julesburg where Steve worked as a Diesel Mechanic for Thrasher Motors. Steve's career at the dealership spanned 24 years. In 2006, he started his own businesses, Steve's Towing and Recovery and Collins Repair, which he ran successfully until the present. Steve didn't have a great deal of time for hobbies, but he did enjoy snowmobiling, four-wheeling, and riding motorcycles. Steve was a perfectionist and took pride in his ability to rise to challenges in life. His work was demanding and Steve saw it as a personal challenge of character to respond to the needs of his customers no matter what time the phone rang. People stranded on the roadsides made it to their events or holidays because Steve sacrificed his own. His resolve and attention to detail seemed inexhaustible. Everything needed to have "the Steve Collins fit." Those that knew him will miss his generosity and his service. Steve was preceded in death by his parents, his sister Jeanna Collins, his mother-in-law Carol Walline, and his nephew Ross Walline. Survivors include his wife, Jacque of Julesburg; brother, Ron (Anna) Collins of Chappell, NE; father-in- law, Lavern Walline of Julesburg; brothers-in-law, Quint (Vicki) Walline of Monument, CO and Jeffrey Walline of Columbus, OH; cousin Dave (Betty) Collins of Julesburg; along with nieces, nephews, other relatives, and many friends. A memorial has been established in Steve's memory to support the local community. Condolences may be shared at prairiehillsjulesburg.com, where the service will be streamed live for those unable to attend. Memorial services will be held on Friday, April 9 at 2:00 pm at the Sedgwick County Fairgrounds in Julesburg. Interment of cremains will be in the Ovid Cemetery. Please follow the CDC guidelines for mask wearing and social distancing. The family would like to thank all First Responders and medical staff for the care provided. Prairie Hills Funeral Home of Julesburg is in charge of arrangements.

The family of Steven Collins created this Life Tributes page to make it easy to share your memories.

Send flowers to the Collins family.