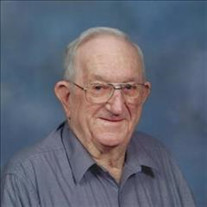 STANLY F. DOLEZAL, 92, of Julesburg, CO, passed away Wednesday, June 8, 2022, at the Sedgwick County Nursing Home in Julesburg. Stanly was born on August 28, 1929, at the family farm north of Venango in Perkins County. He was the youngest of four children born to Charles A. and Frances Klabenes Dolezal. He graduated from Venango High School with the class of 1946. Stanly served in the United States Army from October 3, 1951, until July 2, 1954, including 14 months in Korea as a helicopter mechanic. On February 16, 1957, Stanly married Gwendolyn V. Heinzman at St. Anthony's Catholic Church in Julesburg. Their union was blessed with six children, Michael, Mary, Thomas, John, Daniel, and Patrick. After Stanly had been discharged, he went to work on the family farm and did construction work until July of 1965, when he started carrying mail out of the Venango post office. In April of 1979, Stanly transferred to Hershey, and in July 1985, he moved to Big Springs, where he retired in September 1994. throughout his time with the post office, Stanly continued to farm concurrently. Stanly was a man of deep faith, and he was active in the Catholic parishes that he belonged to over the years. He was also a devoted family man and dedicated farmer, and rural mail carrier. Over his very long career in farming, Stanly had missed a total of three harvests, two of which were due to his time in the war. He was very active in both the Nebraska and National Rural Carriers Associations. He also served on the Venango Fire Department and Venango School board. Stanly had a reliably dry humor that often brought a refreshing sense of levity to most situations. He was very much wrapped up in the love of his children, grandchildren, and family. For example, Stanly would often read the correspondences their daughter sent home from college before they ever made it to the mailbox at home. He cherished his time with his loved ones, and that was always mutual. He was a member of St. Anthony's Catholic Church, The American Legion, and Veterans of Foreign Wars. In addition to his wife, Stanly was preceded in death by all of his siblings and one grandson. Survivors include his six children, Michael (Kathy) Dolezal of Venango, NE, Mary (Dan) Kantor of Julesburg, CO, Thomas (Janice) Dolezal of Norwood, CO, John (Karrie) Dolezal of Grant, NE, Daniel (Nicki) Dolezal of Lexington, NE, Patrick (Nicole) Dolezal of Wray, CO; 17 grandchildren; 23 great-grandchildren; along with many other relatives and friends. A memorial has been established in Stanly's memory for later designation. Condolences may be shared at prairiehillsjulesburg.com, where the Mass will be streamed live. Funeral Mass will be held on Monday, June 20, 2022, at 10 am, at St Anthony of Padua Catholic Church in Julesburg, with Father Herman and Fr Bryan Ernest concelebrating. Interment with Military Honors to follow in the Hillside Cemetery at Julesburg. Visitation will be on Sunday, June 19, 2022, from 3 pm until 5 pm at the Prairie Hills Funeral Home in Julesburg. Prairie Hills Funeral Home of Julesburg is in charge of arrangements.

STANLY F. DOLEZAL, 92, of Julesburg, CO, passed away Wednesday, June 8, 2022, at the Sedgwick County Nursing Home in Julesburg. Stanly was born on August 28, 1929, at the family farm north of Venango in Perkins County. He was the youngest... View Obituary & Service Information

The family of Stanly Dolezal created this Life Tributes page to make it easy to share your memories.

Send flowers to the Dolezal family.