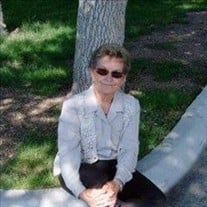 SHIRLEY MAE NESS, 84 of Julesburg, passed away Sunday, December 30th, 2018 at the Sedgwick County Memorial Nursing Home in Julesburg. Shirley was born October 19, 1934, at Julesburg to John "JV" and Alta (Deming) Anderson. She graduated from Julesburg High School with the class of 1952. Shirley moved to Arizona for a year where she worked for the gas company before returning to Julesburg, where she married Ivan LeRoy Ness on June 2, 1957. The couple remained in the area, where they farmed and raised their family. Shirley had done many things in life, and worked hard at all of them; from cooking and waitressing, working at Coffman's Furniture sewing drapes and hanging wallpaper, delivering mail (which she'd done for over 20 years), or being a dedicated and supportive farm wife and mother, Shirley was faithful and diligent in her efforts. In the late 1990s, Shirley and Ivan moved into town. Ivan preceded her in death in August of 2009. Shirley had a great appreciation for sports and genuinely loved to follow her grandchildren in their events. She was also passionate about riding horses, which, in turn, led to her enthusiasm for bull riding. Her family knew not to bother her when bull riding or the Kentucky Derby was on TV. Shirley was mainly about her family and developed strong bonds with her grandchildren. When her grandchildren made friends, Shirley made them too, and as a result, many of the closest friends of her grandchildren looked at Shirley as a grandmotherly figure. Shirley had a knack for cooking and baking, and her pies were held in high esteem by those who were in the know. Her faith was important to her, and she was a long time member of the United Methodist Church in Julesburg. When she wasn't at Church, Shirley's yard was her sanctuary, and she spent countless hours making sure that it was just right, even if it meant lovingly instructing someone else how to cut her grass perfectly. In addition to her husband, Shirley was also preceded in death by her sister, Doris Hughes; brothers, Ralph Andersen, Bernard Anderson, and Raymond Andersen. Survivors include her children, Wyvonna (George) Hofmann of Julesburg, Michael (Kristi) Ness of Julesburg; five grandchildren Karalea (Christopher) Marston, Matthew Hofmann (Shantel), Emmily Hofmann, Bayli (Andrew) Stadler, Taylor (Brandon) Reuter; four great-grandchildren, Lexy, Ainslea, Jacob, and Jameson; brother, Kenneth Anderson of Julesburg; along with many other relatives and friends. A memorial has been established in her memory. Condolences can be shared at prairiehillsjulesburg.com. Services will be Friday, January 4, 2019, at 10:30 AM at the Julesburg United Methodist Church with Pastors Bun Koo Lee and Kristie Firme officiating. Burial will be in the Hillside Cemetery at Julesburg. Visitation will be Thursday, January 3rd, from 2:00 PM to 6:00 PM at the Prairie Hills Funeral Home in Julesburg. Prairie Hills Funeral Home of Julesburg is in charge of arrangements.

The family of Shirley Ness created this Life Tributes page to make it easy to share your memories.

Send flowers to the Ness family.