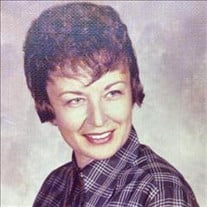 Shirley Ann Blochowitz, 83, of Julesburg, passed away on March 20, 2021. Shirley was born on April 14, 1937, in Lincoln, NE, to Edward and Lillie (Geistlinger) Blochowitz. When Shirley was four, the family made their home south of Julesburg, Colorado, where they established a farm. She graduated from Julesburg High School with the class of 1957. Shirley had an appreciation for details and was quite organized. She was also creative and possessed an artistic grace. Shirley brought these gifts and sensibilities to her work, having served as the secretary for both the principal and superintendent over the years. In 1984, Shirley took over the responsibility of creating class composites for the school, documenting each graduating class with care for posterity. Outside of her professional life, Shirley was a very private person. Her "foot forward" to the world was her yard, which reflected her tendencies toward the orderly and pristine. She favored spending time trimming, pruning, and primping her yard and gardens as an alternative to social fraternizing. From her liberal use of garden statues to her perfectly groomed flowering bushes, Shirley's yard was a sight to behold. On a few occasions, it was even the scene for the exchange of vows. Shirley lived a quiet, tranquil life, better described as a ripple than a wave, which was just the way she liked it. Shirley was preceded in death by her parents, Edward and Lillie Blochowitz, and brother, Lyle Blochowitz. Survivors include her sister-in-law, Kay Blochowitz, of Julesburg, niece, Connie (Bob) Brown of Crook, nephew, Kyle (Jennifer) Blochowitz, of Julesburg, nephew, Kody (Heidi) Blochowitz, of Julesburg; cousins, Carolyn Gerk, of Julesburg, and Butch (Pam) Blochowitz, of Julesburg; and many great-nieces and nephews, other relatives and friends. In lieu of flowers, a memorial account has been established in Shirley's memory at Pinnacle Bank with the intent to support a scholarship. Condolences may be shared at prairiehillsjulesburg.com. Services will be announced at a later date. Prairie Hills Funeral Home of Julesburg is in charge of arrangements.

Shirley Ann Blochowitz, 83, of Julesburg, passed away on March 20, 2021. Shirley was born on April 14, 1937, in Lincoln, NE, to Edward and Lillie (Geistlinger) Blochowitz. When Shirley was four, the family made their home south of Julesburg,... View Obituary & Service Information

The family of Shirley Blochowitz created this Life Tributes page to make it easy to share your memories.

Shirley Ann Blochowitz, 83, of Julesburg, passed away on March...

Send flowers to the Blochowitz family.