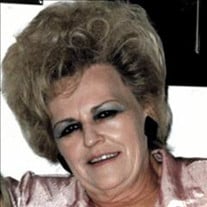 SHIRLEY BLANKENSHIP, 81, of Chappell, passed away October 3, 2021, at the Regional West Medical Center in Oshkosh. Shirley was born June 29, 1940, at Chappell, NE, to Louis and Ahlean Freeman. She graduated from Chappell High School with the class of 1958 and then moved to Denver to work for a short time. On March 6, 1960, Shirley married Billy Gene Blankenship at Chappell, Nebraska. Their union was blessed with two children, Shirley, and Bill Jr. Shirley worked at and then managed the Snow King in Chappell before she and her husband started a custom harvesting business in 1968, where they made many lifelong friends. Together they harvested crops for 20 years from Texas to Montana, the last year of which she did with their son Bill after her husband Bill had passed away. Shirley's life was built upon the pillars of faith and family. She loved to cook and entertain. Nobody left Shirley's house hungry. Though she was a very private person, Shirley was fun-loving and sometimes a little ornery. She brought the very best out of her children and grandchildren and cherished the memories she made with each of them, from sharing a cruise night with her daughter to taking her grandchildren fishing or spinning "cookies" in the parking lot. Whether she was called mom, Gram, or Aunt, she was always bringing fun and joy to those around her. Shirley loved to read her Bible and to watch Christian TV. If it wasn't faith-based, it was probably the Food Channel or a good cookbook. She loved to make special birthday cakes for members of the family and did so on many occasions. Shirley was also a wonderful caregiver and was called to that ministry on several occasions for her grandmothers, an uncle, and her neighbors. Throughout her life, she always had a smile on her face and a Godly attitude in her heart. Surviving her are her daughter; Shirley (Allen) Michel; grandchildren; Keegan Michel, Alicia Blankenship; siblings, Louis (Marge) Freeman, Lois Freeman, Violet Hall; brother-in-law Bob (Marti) Blankenship; sister-in-laws Wanda Speck and Noble Blankenship; and numerous nieces, nephews, other relatives, and friends. Shirley was preceded in death by her husband, Bill Sr; son, Bill Jr; brother, LeRoy Freeman; and her parents. A memorial has been established in Shirley's memory for later designation. Condolences may be shared at prairiehillsjulesburg.com. Private family services will be held at the Assembly of God Church in Chappell. Interment will be in the Chappell Cemetery. Prairie Hills Funeral Home of Julesburg is in charge of arrangements.

SHIRLEY BLANKENSHIP, 81, of Chappell, passed away October 3, 2021, at the Regional West Medical Center in Oshkosh. Shirley was born June 29, 1940, at Chappell, NE, to Louis and Ahlean Freeman. She graduated from Chappell High School with the... View Obituary & Service Information

The family of Shirley Ahlean Blankenship created this Life Tributes page to make it easy to share your memories.

Send flowers to the Blankenship family.