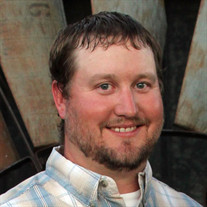 SCOTT BENJAMIN MAUSER, 36 of Big Springs, passed away Wednesday, August 8, 2018, at the Ogallala Community Hospital. Scott was born January 16, 1982, at Ogallala, Nebraska to Kent and Danielle (Anderson) Mauser. He graduated from South Platte High School with the class of 2000, where he was a standout athlete. Scott attended Nebraska Wesleyan University where he played football and earned his degree in sports management. On September 9, 2006, Scott married Mira Brown at the Cairo United Methodist Church. To this union two daughters were born, Jenna Ann, October 27, 2014, and Adley Lynn, January 8, 2018. The couple initially made their home in Sioux Falls, SD, where Scott had been in sales with the Sioux Falls Canaries baseball team. A year later, Scott took a job in sales with the Lincoln Saltdogs, and they subsequently moved to Lincoln. In 2011, Scott and Mira returned to his home town, Big Springs, where he worked on the family farm and worked for Brian Armstrong, as well as farmed and raised cattle of his own. Scott had the opportunity to work at the Department of Roads for a couple of years, where he made many good friends, before returning to work with Brian. While he loved sports, Scott found his calling in farming and ranching. The lifestyle played on his natural gifts of toughness, strength, and big-heartedness. Scott liked to keep things simple and had a dry sense of humor that was easy to love. His family was at the heart of his world, and his decisions were always made with them at the forefront of his mind. He enjoyed hunting, camping, and just having fun. Scott's presence will be sorely missed by his family and countless friends. His legacy will be zealously kept alive by those who have so many good memories left in the wake of his extraordinary life. Scott was preceded in death by his grandfathers Robert Anderson and Murl Mauser. Survivors include his wife, Mira and their two girls, Jenna and Adley, all of Big Springs; his parents, Kent and Danielle Mauser of Big Springs; two sisters, Nicole (Cory) Storer of Bartonville, IL, Shannon (Mike) Suing of Gretna; maternal grandma, Avis Anderson of Big Springs; paternal grandma, Maxine Mauser of Big Springs; mother-in-law, Cindy Brown of Cairo, father-in-law, Randy Brown of Grand Island; sister-in-law, Paige (Rich) Enevoldsen of Grand Island; along with many other relatives and friends. A memorial has been established with the intent to set up college funding for his two daughters. Condolences can be shared at prairiehillsfuneralhome.com, where the service will be live streamed for those unable to attend. Funeral services will be Wednesday, August 15, 2018, at 10:30 am at the Zion Lutheran Church in Big Springs with Rev. Trenton D. Christensen officiating. Burial will follow in the Big Springs Cemetery. Visitation will be Tuesday, August 14, 2018, from 1:00 pm to 6:00 pm at Prairie Hills Funeral Home of Ogallala. Prairie Hills Funeral Home of Ogallala is in charge of arrangements.

The family of Scott Benjamin Mauser created this Life Tributes page to make it easy to share your memories.

Send flowers to the Mauser family.