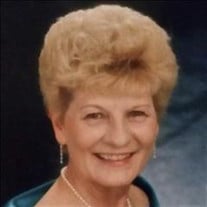 Rozella Elizabeth Dillehay went to be with the Lord on Thursday December 10, 2020. Rozella was born on February 11, 1939 at the Ovid Hospital in Ovid, CO to William Joseph and Rose Catherine (Gareis) Weinbender. Her parents were involved in farming during her early life and she was raised in a 3-room house on the Colorado Nebraska border 3 miles north of Ovid. Her father went to work for the Great Western Sugar Company in Ovid and the family moved to Ovid. Rozella attend the Ovid school system and was involved in band, playing trumpet and as a drum major. She was also a cheerleader for the Ovid High School Red Devils. On New Years Eve 1955 she went to a movie with Alford Royal Dillehay and on January 19, 1957 Alford and Rozella were married at St. Anthony's Catholic Church in Julesburg, CO. Alford and Rozella remained married for the next 60 years until Alford's passing on March 16, 2017. Theirs was a marriage of love, romance and being best friends. To this union were born Douglas Alan and Debra Ann. Alford and Rozella joined the Ovid United Methodist Church shortly into the new century and remained active members of the church. Rozella served 2 terms as president of United Methodist Women of Ovid. She was active in the church's food bank and in the support of events at the church. Rozella worked at different jobs in the Ovid area including the tare house and lab at the Great Western Sugar Company, weekend receptionist at Highline Electric Association and at the Sedgwick County Memorial Hospital. Rozella's best friend after Alford was her sister Linda. Rozella and Linda operated a variety of businesses including a catering business, the Ovid grocery store and the most enjoyable endeavor of her working career, Kodi's Cafe. Rozella loved her family and people. She enjoyed her work at Kodi's because it allowed her to meet people, see old friends and enjoy a game of "poolhall" pitch frequently. Rozella was diagnosed with COPD which slowed her life although she cared for Alford for the last 3 years of his life. She moved to Fort Worth in June 2020 to live out her life closer to her two children, grandson, 6 step grandchildren and 6 step great grandchildren. Rozella was preceded in death by her parents William and Rose, brothers Leonard and Ronald, sister Linda and her loving spouse Alford. She is survived by her brother Duane of Las Vegas, NV, son Douglas, spouse Terri and grandson Alex of Ft Worth, daughter Debra and spouse Cathy of Houston, TX and niece Dana Hicks and spouse Ed of Aurora, CO and nephew Jeff Weinbender and spouse Justina of Santa Barbara, CA. She is deeply loved and missed by many relatives and wonderful friends. A Celebration of Life will be held Saturday, June 12, 2021, at the United Methodist Church in Ovid at 2:30 p.m. with Pastor Kristie Firme officiating. In lieu of flowers memorials can be made in her name to the United Methodist Church of Ovid. Condolences may be shared at prairiehillsjulesburg.com. Prairie Hills Funeral Home of Julesburg is in charge of arrangements.

Rozella Elizabeth Dillehay went to be with the Lord on Thursday December 10, 2020. Rozella was born on February 11, 1939 at the Ovid Hospital in Ovid, CO to William Joseph and Rose Catherine (Gareis) Weinbender. Her parents were involved... View Obituary & Service Information

The family of Rozella Dillehay created this Life Tributes page to make it easy to share your memories.

Rozella Elizabeth Dillehay went to be with the Lord on Thursday...

Send flowers to the Dillehay family.