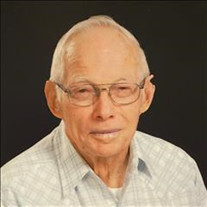 ROBERT POWELL, 90 of Julesburg, passed away December 18, 2020, at the Sedgwick County Memorial Nursing Home in Julesburg. Robert was born the third of seven children, to Raymond and Edna (Harris) Powell, on February 15, 1930. Bob grew up and lived in Sedgwick County his entire life. As children growing up, the family lived on numerous farms. Robert graduated from Ovid High School with the class of 1949. He was subsequently drafted into the U.S. Army in 1952, where he served as a heavy equipment operator in Korea. Following Robert's honorable discharge in 1954, he went to work for a local land leveler, eventually buying his own equipment and running a successful business of his own for many years. On March 6, 1971, Bob married Betty (Critchfield) Haskell. They spent many enjoyable days together, many of which on motorcycle trips. Later on, the couple bought an RV and enjoyed spending winters in Arizona. Bob leaves behind his wife, Betty of Julesburg, and her three children, Karen, Sharon, and Randy; her grandchildren, great-grandchildren, along with many other nieces & nephews. Also, surviving are his brothers, Chuck (Joan) Powell of Sedgwick and Ted (Judy) Powell of Pittsburg, PA. Bob goes on to join his parents, brothers, Gene, Bernard, Rex; and a sister, Mildred, in the Heavenly Father's embrace. Memorial services will be on January 12, 2021, at 10:00 a.m. at the Ovid United Methodist Church, with Pastor Kristie Firme officiating. Interment of cremains will be in the Ovid Cemetery. Prairie Hills Funeral Home of Julesburg is in charge of arrangements.

ROBERT POWELL, 90 of Julesburg, passed away December 18, 2020, at the Sedgwick County Memorial Nursing Home in Julesburg. Robert was born the third of seven children, to Raymond and Edna (Harris) Powell, on February 15, 1930. Bob grew up... View Obituary & Service Information

The family of Robert Powell created this Life Tributes page to make it easy to share your memories.

Send flowers to the Powell family.