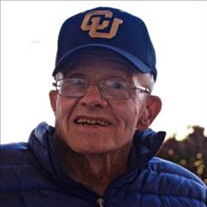 ROBERT "BOB" CARTER, 90 of Julesburg, passed away Thursday, July 19, 2018, at the Sedgwick County Memorial Nursing Home in Julesburg. Bob was born January 13, 1928, at Chappell, Nebraska to Winford and Evelyn (McFee) Carter. He graduated from the Wentworth Military Academy in Kansas City before entering the U.S. Army, where he served as part of the occupation force in Japan at the tail end of WWII. Following his discharge, Bob returned to Nebraska, where he attended the UNL College of Agricultural Sciences and Natural Resources. On March 12, 1950, Bob married Donna J. Sutton at the Methodist Church in Chappell. Bob and Donna would eventually make their home on a farm southwest of Julesburg, and their union was blessed with four sons, Dan, Lanny, Ted, and Bob J. A tireless work ethic was an indelible trait that Bob carried throughout his life. Aware of the uncertainties that often came with a life in farming, Bob made the decision early on that any setbacks he would experience would never be born out of a lack of effort. This was a gift that he passed along to each of his children, who at times, saw him hold as many as three jobs at any given time to provide for his family. While his mentality was undoubtedly work oriented, Bob worked hard to be there for his family throughout their activities and events. From 4-H to athletics, he always made the effort to be present with his family and share in their successes and enjoyments. The importance of family was not lost on Bob, and he always made sure that the entire family would spend holidays together without exception. He was a man of principal, who loved his church and his community. Bob was an avid sports fan and enjoyed rooting for the Colorado Buffaloes, Rockies, and Avalanche. Bob was preceded in death by his wife, Donna; son, Lanny; and brothers, Danny and Burt Carter. Survivors include his sons, Dan (Connie) Carter of Scottsbluff, NE, Ted (Patty) Carter of Julesburg, CO, Bob J. (Megan) Carter of Omaha, NE; daughters-in-law, Carol Carter of Ogallala and Sue Carter of Julesburg; 9 grandchildren, Travis, Andrew, Adam, Laura, Aaron, Kylie, T.J., Macala, and Monique; 15 great-grandchildren; brother, Ben (LaVonne) Carter of Lansing, MI; sister-in-law, Shirley Carter; along with many other relatives and friends. Memorials are suggested to the Julesburg United Methodist Church in Bob's memory. Condolences may be shared at prairiehillsjulesburg.com. Services will be on Tuesday, July 24, 2018, at 10:00 a.m. at the Julesburg United Methodist Church with Pastor Kristie Firme officiating. Burial will be in the Hillside Cemetery at Julesburg. Visitation will be on Monday, from 2 p.m. until 6 p.m. at the Prairie Hills Funeral Home in Julesburg. Prairie Hills Funeral Home of Julesburg is in charge of arrangements.

The family of Robert "Bob" Carter created this Life Tributes page to make it easy to share your memories.

Send flowers to the Carter family.