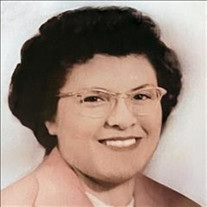 Rita Baladez, 86, of Julesburg, passed away Wednesday, March 24, 2021, at the Sedgwick County Hospital in Julesburg. Rita was born April 26, 1934, in Sedgwick County, Colorado, to Alfredo and Rita (Chacon) Baca. She attended school in Julesburg. On September 7, 1951, Rita married Felix Baladez, and their union was blessed with eight children. The family made their home in Rocky Ford and Fort Morgan before returning to Julesburg in the mid-1960s. Rita was a devout Catholic woman and had a special devotion to Our Lady of Guadalupe and St. Jude. Mothering eight children was her vocation, and through her everyday life, God brought her closer to Himself. It was always of great importance to Rita that her children were raised in the faith, and she led by example. Sometimes in life, we become like those we look up to; Rita was a matriarch who prayed and looked out for everyone. Rita was preceded in death by her parents; husband, Felix; grandsons, Felix David Baladez Jr., Jesse Baladez, & Wyatt Baladez. Survivors include her children, Elithia (Roger) Fleshman of Cheyenne, WY, Barbara Baladez of Julesburg, Felix David (Denise) Baladez of Julesburg, James (Sharon) Baladez of Orchard, Cindy (Clay) Wickizer of Wallace, NE, Christopher Baladez of North Platte, NE, Angelita Ryan of Ovid, Joseph (Mabelyn) Baladez of Tillamook, OR; 21 grandchildren; 33 great-grandchildren; siblings, Rosie Trujillo and George Baca; along with many other relatives and friends. Memorials are suggested to the St. Jude's Children's Hospital in Rita's memory. Condolences may be shared at prairiehillsjulesburg.com, where the service will be streamed live. Funeral Mass will be held on Monday, March 29, 2021, at 10:30 a.m. at St. Anthony's Catholic Church in Julesburg with Fr. Mike O'Brien as Celebrant. The Rosary will be recited at 10:00 a.m. on Monday at the church. Interment will be in the Julesburg Hillside Cemetery. Visitation will be on Sunday, March 28, 2021, from 1 p.m. - 4 p.m. at the Prairie Hills Funeral Home in Julesburg. Prairie Hills Funeral Home of Julesburg is in charge of arrangements.

The family of Rita Baladez created this Life Tributes page to make it easy to share your memories.

Send flowers to the Baladez family.