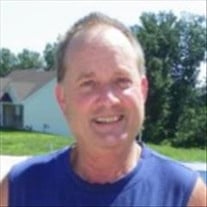 RICHARD "RICK" JOHNSON, 63, of Julesburg, CO, passed away Sunday, July 26, 2020, at his home. Rick was born April 14, 1957, at St. Louis, Missouri, to Walter F. and MaryAnn (Reisch) Johnson. Rick was blessed with two sons, Matthew and Patrick from his previous marriage to Sheryl Lake Johnson. Rick worked in building maintenance at Colorado State University in Fort Collins for 20+ years and retired from there, then started working in building maintenance at Northern Colorado Water Conservancy District for 8 years before fully retiring. In January 2014, Rick moved to Julesburg, where he enjoyed going to the coffee shop and spending time with his friends. Rick very much enjoyed taking care of his many beautiful indoor and outdoor plants and really had a green thumb. He also enjoyed antiquing, going to antique/resale shops or any other place he could find vintage clocks, fans, and other items. He loved working on restoring the treasures he found. He also had a little dog in the past, named Daisy, that found her way into his life. They became best buddies and did everything together especially while working in the yard. Rick was a very giving person in all that he did. Just one of the many examples is, he volunteered for years at Habitat for Humanity working and fixing all their electrical items and even got an award for his service to others. Rick was preceded in death by his parents, Walter and MaryAnn. Survivors include his children, Matthew Johnson (and grandson Brendyn) of Loveland, CO, and Patrick Johnson of Fort Collins, CO; brothers, David (Pam) Johnson of Fenton, MO, Mark (Carol Sue) Johnson of Lake Saint Louis, MO, Twin sister, Cindy (Bill) Tunze of Loveland, CO, Michael (Jackie) Johnson of Indian Trail, NC; along with many nieces, nephews, great-nieces, great-nephews, Aunts, Uncles, other relatives and friends. In Lieu of flowers memorial donations in Rick's memory can be made to Habitat for Humanity. Condolences may be shared at prairiehillsjulesburg.com. A memorial service for Rick is being held Thursday, August 27, 2020 at 2:00 pm at the Prairie Hills Funeral Home Chapel with Father Mike O'Brien officiating. Prairie Hills Funeral Home of Julesburg is in charge of arrangements.

The family of Richard Johnson created this Life Tributes page to make it easy to share your memories.

Send flowers to the Johnson family.