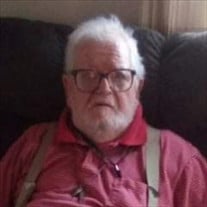 Raymond P. Paquette, 85, of Julesburg, passed away February 5, 2022, at his home in Julesburg, CO. Raymond was born on October 13, 1936, to Albine and Alice (Chandler) Paquette in Woonsocket, Rhode Island. Raymond married Betty Paquette on June 25, 1960. Their union would be blessed with Donna, Raymond Jr., Colleen, Daniel, and Fred. The couple made their home in Woonsocket, Rhode Island, before moving to California in June of 1976. Raymond's first job was working in the bowling alleys setting pins by hand. He would later go to work sewing and making shoes by hand. Raymond finished his career working in the oil refineries, where he insulated the fittings. The family moved to Julesburg in the late 1990s, where they made many wonderful friends. Raymond was very devout and active in St. Anthony of Padua Catholic Church in Julesburg, where he attended daily Mass and served as an Extraordinary Communion Minister and Knights of Columbus. He fostered a deep devotion to the Virgin Mary for over fifty years and prayed the Rosary twice a day. Raymond was preceded in death by his parents, wife Betty, infant son, James, son Daniel. Survivors include his children, Donna Arrollo of Julesburg, Raymond (Wendy) Paquette Jr. of Apopka, FL, Colleen (William) Babcock of Julesburg, Fred (Melissa Hager) Paquette of Beatrice, NE; 11 grandchildren; 18 great-grandchildren; siblings, Bertha (Keith) Hays of Lakewood, CA, Constance (Elliott) Fischer, Joanne (Bruce) Buteau, and Jerry (Cheryl) Paquette, all of Woonsocket, RI; along with many other relatives and friends. In lieu of flowers, a memorial has been established in Raymond's memory for later designation. Condolences may be shared at prairiehillsjulesburg.com, where the services will be streamed live. Visitation will be on Tuesday, February 8, 2022, from 2:00 pm to 4:00 pm at the Prairie Hills Funeral Home Chapel. Funeral Mass will be on Wednesday, February 9, 2022, at 2 pm at St. Anthony of Padua Catholic Church in Julesburg, with Fr. Jjuuko "Herman" Nsubuga as Celebrant. Interment will be in the Julesburg Hillside Cemetery. Rosary will be recited on Tuesday, February 8, 2022, at 4:00 pm at the Prairie Hills Funeral Home Chapel. Prairie Hills Funeral Home of Julesburg is in charge of arrangements.

The family of Raymond P Paquette, SR created this Life Tributes page to make it easy to share your memories.

Send flowers to the Paquette family.