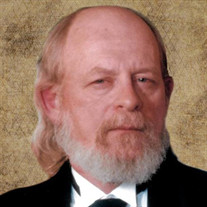 Randall "Randy" Lee Buettenback, 66 of Julesburg, CO, passed away on Monday, December 11, 2017, in Greeley, CO, surrounded by his family. Randy was born to Dewey and Faye Marie (Andersen) Buettenback on March 24, 1951, in Julesburg, CO and resided there until his death. He graduated from Julesburg High School in 1970. He married Brenda Fidge in 1971 and had five children. He was a remarkable provider and was employed by Great Western Sugar/Western Sugar and became a full-time employee in 1971 until his retirement in 2015. His responsibilities were sugar boiler, welder, foreman, and top mechanic. During his full-time work, he also took on several side jobs and ran his own company known as R, J & J Construction, where he and his five children worked. His family was his world, and his grandkids adored him. He had the greatest of friends and had many wild and crazy stories to share. He loved his music and favored The Beatles. Music always played from his man cave in his garage, which was his favorite place to be. He enjoyed construction, woodwork, black powder guns, cooking, history, Free Beer Friday’s, Republicans, and loved America, Sedgwick County and the people who resided there. He was an amazing husband, father, granddad, son, brother, uncle, cousin, in-law and friend. He was preceded in death by his parents, Dewey and Faye Buettenback, sister Eula Mae (at birth), brothers, Jack Buettenback and wife Mildred of Ogallala, Ne., Cleo Buettenback and wife Charlotte of Julesburg, Co., sister-in-laws, Betty Buettenback of Holdrege, Ne and Earline Buettenback of Julesburg, Co., brother-in-law, Ottis Fidge of ND. and his father-in-law, Stanley Fidge of ND. Memorials are suggested to the Julesburg High School Band Fund or the Revere High School Band Fund. He is survived by his wife, Brenda (Fidge) Buettenback of Julesburg, Co., son, Joseph Buettenback and children Anders, Rafe, Liam and Piper of Sedgwick, Co., daughter, Rhonda Robbins and husband Barron and children Teighon, Kaihdyn and Jaevin of Frederick, Co., son, John Buettenback and children Marcus and Kaylee of Thornton, Co., son, Jason Buettenback of Sidney, Ne., son, Jeffrey Buettenback and children Jaxen and Alyn of Sidney, Ne., brother, Robert Buettenback of Julesburg, Co., sister, Elzora Bills and husband Wes of Ft. Morgan, Co. and several nieces, nephews and cousins. Parent-in-laws, Deloris and Jerry Walsh of ND and sisters-in-law, Bonnie Schweitzer of KS and Madyline Neuman of ND. His cherished loved ones are Carla and Cadin Persson of Thornton, Co. and Jenna and Kade Walmsley of Ovid, Co. Memorial services will be December 19, 2017, at 11:00 am at the Prairie Hills Funeral Home (Formerly Austin-Tennant Funeral Home) in Julesburg, CO with Art Roth officiating. Prairie Hills Funeral Home of Julesburg is in charge of arrangements.

Randall "Randy" Lee Buettenback, 66 of Julesburg, CO, passed away on Monday, December 11, 2017, in Greeley, CO, surrounded by his family. Randy was born to Dewey and Faye Marie (Andersen) Buettenback on March 24, 1951, in Julesburg, CO and... View Obituary & Service Information

The family of Randall Buettenback created this Life Tributes page to make it easy to share your memories.

Send flowers to the Buettenback family.