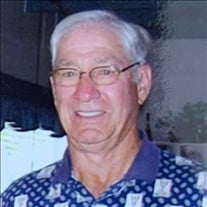 RALPH E. MILLER, 87, of Julesburg, passed away Wednesday, July 15, 2020, at the Sedgwick County Memorial Nursing Home in Julesburg. Ralph was born October 18, 1932, at Coldwater, Kansas to Harold and Hazel (German) Miller. In the Summer of 1951, Ralph met Shirley Hauder at a church camp. The two were later married on December 27, 1953, and their union would be blessed with three children. Ralph made his living running a private trash truck in Julesburg for several years. He spent time working at a hospital in the Denver area, and in 1955, went to work for his father-in-law hauling freight. Unloading train cars and delivering to the local lumber yards and delivering boxes of goods to local stores. In 1967, Ralph started his own excavating business, which he ran until his retirement. Ralph and Shirley moved to Desert Hot Springs, California. While there, Ralph worked on an excavating crew building one of the golf courses that his brother lived on. Ralph did a lot of different work to take care of his family. Ralph loved being outdoors. He always enjoyed spending time at Jumbo Lake, water skiing, fishing, and golfing. They traveled to Desert Hot Springs for the winters. Ralph was exceptionally skilled at pitching horseshoes and enjoyed playing whenever he could. Ralph also enjoyed elk and deer hunting. Ralph served his community in many ways, including the Sedgwick county ambulance crew for over 20 years, firefighter and chief for over 20 years, Julesburg city council and mayor, Julesburg school board as president, Julesburg cemetery board, and the Mennonite church board. He even cut trees down to get wood for town folks in need. If it needed to be done, he would figure out a way to accomplish it. Ralph was preceded in death by his two daughters, Patty and Peggy; and his siblings, Dell, Wayne, Russell, Jake, Dale, and Gene. Survivors include his wife, Shirley of Julesburg; son, Dennis (Rhonda) Miller of Chappell; sisters Christina and Irene of Oklahoma. A memorial has been established in Ralph's memory for later designation. Condolences may be shared at prairiehillsfuneralhome.com. A memorial service will be held at a later date. Interment of cremains will be in the Julesburg Hillside Cemetery. Prairie Hills Funeral Home of Julesburg is in charge of arrangements.

RALPH E. MILLER, 87, of Julesburg, passed away Wednesday, July 15, 2020, at the Sedgwick County Memorial Nursing Home in Julesburg. Ralph was born October 18, 1932, at Coldwater, Kansas to Harold and Hazel (German) Miller. In the Summer of... View Obituary & Service Information

The family of Ralph E Miller created this Life Tributes page to make it easy to share your memories.

Send flowers to the Miller family.