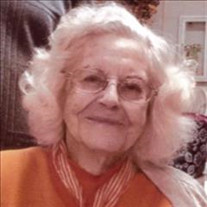 PHYLLIS J DYE, 92 of Julesburg, passed away Sunday, March 29, 2020, at the Sedgwick County Hospital in Julesburg, CO. Phyllis was born June 25, 1927, near Paoli, CO. to Frederick and Anna (Dirks) Harms. She was one of seven children. Phyllis attended Ovid High School and graduated with the class of 1945. She attended beauty school in Denver, though she never worked in that profession. Phyllis met and married Bob Dye, and were blessed with three children. They made their home in Julesburg and owned the local hardware store. Phyllis worked as an operator at the telephone office, worked at Safeway stores, and eventually Dye's Hardware. She was a hard worker and loved to read and play bingo in her spare time. Phyllis and Bob loved traveling and had been to all but two states in the U.S. Phyllis also enjoyed her class reunions and kept close track of her classmates. She was one of the last five members left from her graduating class. Phyllis was preceded in death by her husband, Bob; granddaughter, Stephanie Ann Schneider; and siblings, Alfred, Leonard, Rudolph, Darlene, Clarence, and LeRoy. Phyllis is survived by her son, Robert Steven Dye of Julesburg; daughters, Barbara June (Robert L.) Schneider of Wray, and Kathy Ann Wehrley of Olympia, WA; nine grandchildren; thirteen great-grandchildren; one great-great-grandchild, along with many other relatives and friends. A memorial has been established in her memory for later designation. Condolences may be shared at prairiehillsjulesburg.com, where a recording of her service has been posted. A private family graveside service was held Monday, March 30, 2020, at the Hillside Cemetery in Julesburg with Pastor Alan Harris officiating. Prairie Hills Funeral Home of Julesburg was in charge of arrangements.

PHYLLIS J DYE, 92 of Julesburg, passed away Sunday, March 29, 2020, at the Sedgwick County Hospital in Julesburg, CO. Phyllis was born June 25, 1927, near Paoli, CO. to Frederick and Anna (Dirks) Harms. She was one of seven children. Phyllis... View Obituary & Service Information

The family of Phyllis J Dye created this Life Tributes page to make it easy to share your memories.

Send flowers to the Dye family.