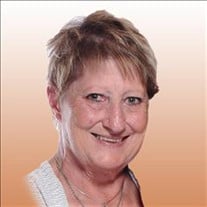 PEGGY LOU RAYMOND, 65 of Sedgwick, Colorado, passed away November 5, 2019, at her home in Sedgwick. Peggy was born October 24, 1954, in Julesburg, Colorado to Ralph and Shirley Miller. She graduated from Julesburg High School with the class of 1972. For the majority of her life, Peggy resided in Sedgwick County, where was known to serve and cook at Lucy's Place since the summer of 1997. She lived life boldly! Peggy was a current and longtime Trustee for the town of Sedgwick. She liked traveling, camping, ATV'ing and spending time in Lake City, CO celebrating the 4th of July with friends and family. Peggy loved her grandchildren and always enjoyed watching their various sporting activities. Peggy was preceded in death by her grandparents, husband Timothy Raymond and sister, Patty Miller. Survivors include her two sons, Cris Matoush of Montrose, CO and his two daughters Madisen and Logen; Travis Matoush of Parker, CO, and his wife Nevada and their 3 children Rhya, McKinnley and Leyton her parents, Ralph and Shirley Miller of Julesburg; brother, Dennis Miller of Chappell, NE; numerous nieces, nephews and cousins. A memorial has been established in Peggy's memory for later designation. Condolences may be shared at prairiehillsjulesburg.com. A celebration of Peggy's life will be held at the Sedgwick County Lion's Club on Monday, November 11, 2019, at 2 p.m. Interment of cremains will be in the Julesburg Hillside Cemetery at a later date. Prairie Hills Funeral Home of Julesburg is in charge of arrangements.

PEGGY LOU RAYMOND, 65 of Sedgwick, Colorado, passed away November 5, 2019, at her home in Sedgwick. Peggy was born October 24, 1954, in Julesburg, Colorado to Ralph and Shirley Miller. She graduated from Julesburg High School with the class... View Obituary & Service Information

The family of Peggy Lou Raymond created this Life Tributes page to make it easy to share your memories.

Send flowers to the Raymond family.