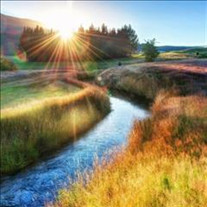 PATRICIA L. RABE, 89 of Julesburg, formerly of Chappell, NE, passed away Monday, February 17, 2020, at the North Colorado Medical Center in Greeley. Patricia was born March 2, 1930, at Big Springs, Nebraska to Harold and Helen (Walberg) Palser at the home of her maternal grandparents, Claus and Ida Walberg. The family moved to the Davis Creek community between Ord and St. Paul, NE, when Patricia was two, before returning to Big Springs, where she began country school at the age of five. She would attend Districts 28 and 19 before graduating from Big Springs High School in 1947 as Salutatorian and went on to complete normal training with honors to become a teacher. Patricia spent her first year in education teaching north of Big Springs before electing to teach near Chappell for the next two years. She would later teach north of Julesburg, CO. On September 16, 1951. she married Darrell Rabe, and their union was blessed with three sons. The family made their home on the Rabe Ranch south of Chappell for over 30 years. Most recently, Patricia had been residing at the Sedgwick County Nursing Home. Patricia was preceded in death by her son, Kendall Rabe; husband, Darrell Rabe, and brother Duane Palser of Idaho. Patricia is survived by two sons, Lanis Rabe of Big Springs, NE, and Brad Rabe of Neligh, NE; sister-in-law, Phyllis Palser Church of Idaho. Private family interment of cremains will be in the Ft. McPherson National Cemetery at Maxwell, NE. No other services are planned at this time. Prairie Hills Funeral Home of Julesburg is in charge of arrangements.

The family of Patricia L. Rabe created this Life Tributes page to make it easy to share your memories.

Send flowers to the Rabe family.