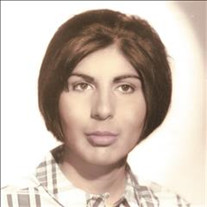 OFILIA PAIZ, 78 of Ovid, CO, passed away Sunday, October 7, 2018 at the Haxtun Hospital. Ofilia was born September 19, 1940 in Mathis, Texas to Toribio and Irene (Encinia) Garza. While still in Texas, Ofilia met her future husband, Amador, through his sister. They moved to Julesburg in 1973, and married in July of 1974 at St. Anthony of Padua Catholic Church in Julesburg. To this union, four sons and a daughter were born. In 2010, Ofilia had a stroke of which she never fully recovered. Amador retired to care for her. Ofilia's faith and hard work were of utmost importance to her. She was an excellent cook, with enchiladas being her specialty. In later years, she enjoyed going to Rosebud or Deadwood to gamble. Ofilia was preceded in death by her parents and daughter Norma Jean. Survivors include her husband, Amador of Ovid; sons, Amador Jr. of Greeley, Adrian and Jhoee of Wellington, Chris of Greeley, and Omar and Kelly of Windsor; 4 grandchildren, Bryanna, Brentyn, Brynlee, and Parker; brother, Toribio Jr.; sisters, Maria and Sylvia; and many other relatives and friends. A memorial has been established in her memory. Condolences can be shared at prairiehillsjulesburg.com. A Funeral Mass will be Thursday, October 11, 2018 at 10:30am at St. Anthony of Padua Catholic Church in Julesburg with Father Michael O'Brien as Celebrant. Visitation will be Wednesday, October 10th from 1:00pm to 6:00pm at Prairie Hills Funeral Home in Julesburg. Prairie Hills Funeral Home of Julesburg, CO is in charge of arrangements.

The family of Ofilia Paiz created this Life Tributes page to make it easy to share your memories.

Send flowers to the Paiz family.