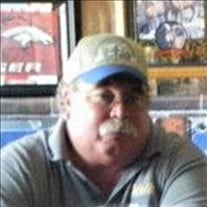 MONTY R. KINOSHITA, 61, of Sedgwick, CO, passed away June 28, 2020, at his home. Monty was born July 21, 1958, at Julesburg, Colorado, to Minoru and Delma (Donaldson) Kinoshita. He attended grade school in Sedgwick before graduating from Revere High School. Monty helped farm with his family before going to work for the Sedgwick County Road and Bridge, a job he held to the present. In 1984, Monty married Gena Kaiser in Julesburg, and the couple made their home in Sedgwick. Their union was blessed with one son, Troy. Monty enjoyed his work on the road grater and was excellent at it. In younger years, Monty enjoyed hunting, fishing, arrowhead hunting, and coin collecting. Monty could be stubborn from time to time. He always enjoyed spending time with his friends over a cold beer. Monty found new meaning in life when his granddaughters were born; he absolutely adored them. Monty was preceded in death by his parents; and a sister, Bonnie Ziegler. Survivors include his wife, Gena Kinoshita of Sedgwick; son, Troy (Chastity) Kinoshita and their two daughters, Alexa and Rylee, of Sedgwick; two sisters, Connie (George) Rober of Sedgwick and Lonnie (Bill) Palser of Julesburg; along with many other relatives and friends. A memorial has been established in Monty's memory for later designation. Condolences may be shared at prairiehillsjulesburg.com. Graveside services for Monty will be held on Friday, July 3, 2020, at 10:00 am at the Sedgwick Cemetery. Prairie Hills Funeral Home of Julesburg is in charge of arrangements.

MONTY R. KINOSHITA, 61, of Sedgwick, CO, passed away June 28, 2020, at his home. Monty was born July 21, 1958, at Julesburg, Colorado, to Minoru and Delma (Donaldson) Kinoshita. He attended grade school in Sedgwick before graduating from Revere... View Obituary & Service Information

The family of Monty Ray Kinoshita created this Life Tributes page to make it easy to share your memories.

Send flowers to the Kinoshita family.