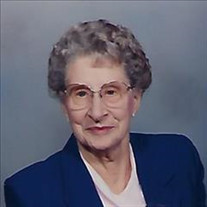 MAXINE E. BOHMONT, 97 of Julesburg, passed away March 2, 2018, at the Sedgwick County Nursing Home in Julesburg, CO. Maxine was born April 19, 1920, on a farm south of Sedgwick, Colorado to John and Vida Lee (Scott) Wegman. She graduated from Sedgwick County High School with the class of 1939. She then enrolled in a nursing program briefly, before returning home to Sedgwick, where she worked at the library and provided in-home nursing care to new moms. On August 22, 1943, Maxine married Carl Bohmont, and their union was blessed with three children. Maxine proudly embraced her role as a homemaker and gave herself entirely to her vocation. She was an excellent cook and baker and was devoted to her family and loved ones. Her life was enriched when she and Carl were blessed with grandchildren and great grandchildren and they much enjoyed taking road trips and spending time with them in their homes. Family was truly the focal point in Maxine's life. Many of Maxine's most cherished memories took place over the holidays, which were adorned with delicious food, good laughs, card playing and the sheer joy of being with those she loved. Most recently, Maxine had been residing at the Sedgwick County Nursing Home, where she received excellent care. Maxine was preceded in death by her parents and mother-in-law, siblings who died in early infancy, her beloved husband, Carl Bohmont, brothers-in-law, Maynard Bohmont and Harley Beebe, son-in-law, Gary Cressey, sister-in-law and dear friend, Roberta Wegman, and nephew, John Wegman. Maxine is survived by her son and daughter-in-law, Dr. Wendell and Sharon Bohmont of Schuyler, NE, daughter, Linda Cressey, of Westminster, CO, and daughter and son-in-law, Barbara Jean and Kenneth Helt, of New London, IA. In addition, she is survived by grandchildren and their spouses, Brent Bohmont and Carolyn Brown, of Denton, Texas, Stacy and Scott Lickteig, of Omaha, NE, Aaron Hoffman, of Arvada, CO, Brice and Brandi Hoffman of Thornton, CO, and Laura Helt of Omaha, NE. Great-grandchildren include Zachary, Madelyn and Joshua Lickteig of Omaha, NE; Alex and August Bohmont-Brown of Denton, TX, and Taylor Hoffman of Thornton, CO. Siblings, Vince Wegman, of Julesburg, and Wilma Beebe, of Kimball, NE. Nieces, Donna Beebe Hamilton, College Station, TX, and Kathleen Beebe Kulhman, San Dimas, CA, and nephews, Ron Wegman, Sun City, AZ, and Lon Wegman, Julesburg, CO. A memorial has been established in Maxine's memory at Orphan Grain Train, Rocky Mountain Branch, PO Box 152, Julesburg, CO, 80737. Condolences may be shared at prairiehillsjulesburg.com , where the service will be streamed live for those unable to attend. Services will be held on Saturday, March 10, 2018, at 1:00 p.m. at the Prairie Hills Funeral Home in Julesburg with Art Roth officiating. Burial will be in the Hillside Cemetery at Julesburg. Visitation will be held one hour prior to service time at the funeral home. Prairie Hills Funeral Home of Julesburg is in charge of arrangements.

MAXINE E. BOHMONT, 97 of Julesburg, passed away March 2, 2018, at the Sedgwick County Nursing Home in Julesburg, CO. Maxine was born April 19, 1920, on a farm south of Sedgwick, Colorado to John and Vida Lee (Scott) Wegman. She graduated from... View Obituary & Service Information

The family of Maxine Elizabeth Bohmont created this Life Tributes page to make it easy to share your memories.

Send flowers to the Bohmont family.