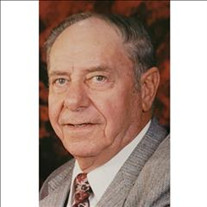 MARVIN "SAM" MARQUARDT, 95, of Julesburg, CO, passed away Tuesday, June 14, 2022, at Regent Park Nursing and Rehabilitation in Holyoke. Sam was born on October 5, 1926, on the family farm south of Julesburg to Fred and Louise (Weiland) Marquardt. He was baptized on October 31, 1926, at his parents home and confirmed on April 6, 1941, at St Paul's Lutheran Church Venango, NE. Sam attended rural school before entering the U.S. Army, where he served in the Philippines during WWII. He was responsible for his unit's postal facility as well as securing the area against the enemy. Following his discharge, Sam was united in marriage to Loraine Ione Klitzke on June 27, 1948, at St. Paul's Lutheran Church in Julesburg and the couple made their home on the family farm. Their union was blessed with a daughter, Barbara, and two sons, Bruce and Jeff. Sam and Loraine would live, raise their children, and farm south of Julesburg for the rest of their married lives. Sam was a member of what came to be known as The Greatest Generation. He was the type of man that helped to build small-town America after the war. Sam was a lifelong farmer, dedicated father, two-term County Commissioner, board member of the Venango Coop, a lineman for the local phone company, 4-H leader, lifelong member of St. Paul's Lutheran Church, and a member of the American Legion for nearly 80 years, devoted father, and loving husband. Sam and Loraine's 73-year marriage was blessed with many wonderful memories spanning from the dances of their youth, harmonizing with their children on car rides, and relishing moments spent with grandchildren and great-grandchildren. Sam had a special way of engaging his grandchildren that really fostered deep connections. They brought him great joy, and he spent a great deal of time with them curled up on his lap while sitting in his favorite chair. He was preceded in death by his parents, Fred and Louise Marquardt, siblings Oscar, Arthur, Herman, Elmer, Herbert, and sisters Hilda Benker and Mildred Bauerle. Survivors include his wife, Loraine, daughter Barbara Bouvier and her children Shara and Jean-Claude and his wife Liz and two children; son Bruce Marquardt and his wife Betsy, son Jeff Marquardt and his wife Renee and their son Dustin and his wife Megan and two children, and daughter Brandee with her husband Jay Chapman and two children, Sam's sister Elsie Pirrie and a large number of nieces and nephews and friends. Memorials are suggested to the Orphan Grain Train of Julesburg, CO, or St. Paul's Lutheran Church in Venango in Sam's memory. Condolences may be shared at prairiehillsjulesburg.com, where the service will be streamed live. Memorial services will be held on Saturday, June 18, 2022, at 10:30 am at St. Paul's Lutheran Church in Venango, with Rev. Kurt Hatteberg officiating. Inurnment will follow in the Venango cemetery. Prairie Hills Funeral Home of Julesburg is in charge of arrangements.

MARVIN "SAM" MARQUARDT, 95, of Julesburg, CO, passed away Tuesday, June 14, 2022, at Regent Park Nursing and Rehabilitation in Holyoke. Sam was born on October 5, 1926, on the family farm south of Julesburg to Fred and Louise (Weiland) Marquardt.... View Obituary & Service Information

The family of Marvin "Sam" Marquardt created this Life Tributes page to make it easy to share your memories.

Send flowers to the Marquardt family.