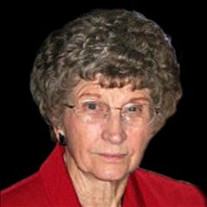 MARTHA LOUISE NEUBAUER, 90 of Scottsbluff, formerly of Ogallala, passed away November 30, 2018, at the Regional West Medical Center in Scottsbluff, NE. Martha was born August 5, 1928, at Julesburg, Colorado to Edmund and Susanna "Suzie" (Klug) Lanckriet, the eighth of fourteen children, and was nicknamed "Sis." Martha met Albert Leon Neubauer at a local dance, and the two subsequently married on November 11, 1953. From their union, four children were born, Randall, Doug, Karen, & JoAnn. They made their home in Ovid, Colorado until 1966, when they moved to Brule, NE. Following Albert's passing in 1982, Martha moved to Ogallala, where she resided until 2014. Martha would eventually move to Scottsbluff to be closer to her daughters Karen MecKlem and JoAnn Golden. Martha was a devoted wife, mother, and grandmother. Albert was a farmer by trade, and Martha was always a tremendous support to him over the years. Also, she was employed by TRW in Ogallala from the late 1970s until her eventual retirement. Martha was an avid gardener and fastidious homemaker. One of Albert and Martha's primary goals was to provide educational opportunities for their children so that they might succeed in their future lives. She was a devoted member of St. Anthony of Padua Catholic Church in Julesburg until their move to Ogallala, when she became a member of St. Luke's Catholic Church. She had been an active member of the Altar Societies of both churches. Martha will be truly missed by her children, grandchildren, great-grandchildren, family and friends. Martha was preceded in death by her parents, her husband, Albert Neubauer; a daughter-in-law, Patty Neubauer; two sisters, Julia (Girly) Blochowitz and Margaret Jones; and nine brothers, Henry "Hank", Edmund "Shorty", Fredrick "Fred", Donald "Dutch", Clarence "Jerry", Francis "Jigs", Albert "Skeet", and two infants. Survivors include her children, Randall (Julie) Neubauer of Apple Valley, MN, Doug Neubauer of Hastings, NE, Karen (Curt) Mecklem of Scottsbluff, NE, and JoAnn (Robert) Golden of Mitchell, NE; 27 grandchildren; 12 great-grandchildren; her sisters, Suzanne (Darrell) Zimmerman of Julesburg and Mary (Donald) Phelan of Big Springs, NE; sisters-in-law, Donna Lanckriet of Hay Springs, NE, Margaret Lanckriet of Morrill, NE, Freda, Janie, and Arline Lanckriet, all of Julesburg; along with many other relatives and friends. A memorial has been established in Martha's memory for later designation. Condolences may be shared at prairiehillsjulesburg.com. Mass of Christian Burial will be Friday, December 7, 2018, at 2:00 pm at St. Anthony of Padua Catholic Church in Julesburg with Father Michael O'Brien as Celebrant. Burial will be in the Hillside Cemetery in Julesburg. A Rosary will be recited one-half hour prior to service time at the church. Visitation will be Thursday, December 6th from 2:00 pm to 6:00 pm at Prairie Hills Funeral Home of Julesburg. Prairie Hills Funeral Home of Julesburg, CO is in charge of arrangements.

The family of Martha Neubauer created this Life Tributes page to make it easy to share your memories.

Send flowers to the Neubauer family.