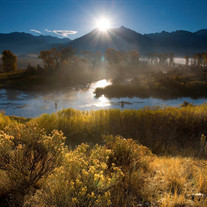 Marilyn March, 76, passed away Thursday, March 21, 2019, at the Sutherland Care Center in Sutherland, NE. Marilyn was born on January 6, 1943 to Leonard and Esther Smith of Sedgwick. Marilyn graduated from Sedgwick High School in 1961. Marilyn married Mick Carlson, and couple made their home in Chappell for several years. Together they were blessed with two sons, Todd and Troy and daughter, Chellee. Following a divorce, Marilyn went to work for the VA Hospital in Hot Springs, South Dakota. It was there she started her counseling career and trained to be a nurse. She then transferred to the VA Hospital in Salisbury, North Carolina and worked passionately in that field for many years. In 2009 Marilyn retired and returned to Colorado to be closer to family. In recent years she made her home in North Platte and Sutherland, Nebraska. Marilyn loved horseback riding and spending time around horses. She found her true calling when she became an addiction counselor and dedicated herself to the benefit of the people she advised. She went to great lengths to do her job, even overcame a knife attack from a disturbed client, without being deterred. She received many awards of excellence in her work. Marilyn was preceded in death by her parents; two sons, Todd and Troy Carlson; and a brother, Bob. Survivors include a daughter-in-law, Deb Carlson of North Platte; daughter, Chellee Westerbuhr of Julesburg; sister, Nancy (Larry) Schutt of Julesburg; brother, Pete (Marilyn) Smith of Colorado Springs; five grandchildren, other friends and relatives. A memorial has been established in Marilyn's memory for Alzheimer's Research. Condolences may be shared at prairiehillsjulesburg.com. A memorial service will be held at the Presbyterian Church in Sedgwick, CO on Monday, April 8, 2019 at 2 p.m. Rev. Larry Nail will preside. Prairie Hills Funeral Home of Julesburg is assisting the family.

The family of Marilyn March created this Life Tributes page to make it easy to share your memories.

Send flowers to the March family.