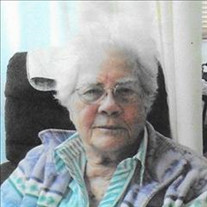 MARIETTA ALICE HAAS WALMSLEY September 11, 1932 - April 7, 2022 Marietta Walmsley, age 89, died April 7, 2022, at the Sedgwick County Nursing Home in Julesburg, Colorado. Following cremation, inurnment will be at Hillcrest Memorial Park Cemetery in Norfolk, Nebraska. Prairie Hills Funeral Home in Ogallala has been entrusted with her care. Marietta Alice Haas was born near Pierce, Nebraska, on September 11, 1932, to Thomas Harry Haas and Alice "Rose" Murphy Haas. She graduated from Pierce High School, attended college to get her teaching certificate, and then taught school for about one year. On June 11, 1950, she married Lloyd David Walmsley in Pierce, NE. They had five children - Dean, Ramona, Alice, and twins David and Dwain while they lived in Norfolk, where Lloyd worked for the Nebraska Department of Roads. In 1964 they moved to Sidney, Nebraska, where they owned and operated The Ranch Motel. Lloyd also worked for the Nebraska Department of Roads in Sidney. Marietta helped with the motel (renting rooms, making beds, cleaning rooms, and laundry) and was a stay-at-home mom. She attended First Presbyterian Church and is a lifetime member of the VFW Auxiliary. Lloyd and Marietta traveled after he retired from the State of Nebraska in 1980. After selling the motel, they traveled, seeing much of the United States, including Alaska and Canada, and Mexico, while being full-time "RVers." Marietta often worked part-time as a casino/restaurant hostess. For a few years, they were campground hosts in several National Parks. In 2000 they settled into the Retirement Housing in Gering, NE, but continued to travel until Lloyd died in 2002. Marietta did some traveling with a friend visiting Panama, Hawaii, China, and Maryland. She helped with Coop commodities, sold poppies, marched in parades, and helped with VFW Bingo. In 2014 she moved to Hilltop Housing in Chappell, NE, to be closer to her son Dean, later moving into the Assisted Living in Chappell and then to the Assisted Living in Julesburg, CO. After breaking her ankle in 2017, she moved into the Sedgwick County Nursing Home and lived there until her death. She enjoyed the activities there and liked visiting with those who stopped by. She watched game shows like Wheel of Fortune, Jeopardy, and The Price is Right. Reading was her passion, and she had books and magazines tucked everywhere in her room. She was preceded in death by her infant sister, parents Tom and Rose Haas, husband Lloyd, daughter and son-in-law Ramona and Ron Power, son Dwain Walmsley, and Grandson Jonathan Power. Survivors include her children, Dean and Linda Walmsley of Chappell NE, Alice Walmsley of Scottsbluff NE, and David and Helen Walmsley of Douglas WY; six grandchildren (Jennifer, Brent, Jaime, Jason, Justin, Rona, Derrick, Jeremy, and Lauri); fourteen great-grandchildren, and one great, great-grandchild with another one due in September.

The family of Marietta Walmsley created this Life Tributes page to make it easy to share your memories.

Send flowers to the Walmsley family.