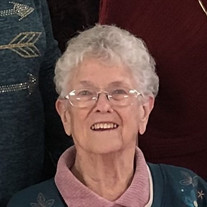 Peggy Ann Rochlitz, 92, of Julesburg, passed away February 9, 2021, at the Sedgwick County Nursing Home in Julesburg. Peggy was born December 2, 1928, at Julesburg, Colorado, to John and Margaret (Fletcher) Donnelly as one of ten children.  She attended rural school in Sedgwick County through the eighth grade. She then moved to California to live with her older sister, Mary, where she could continue her education while nannying her sister's children.  Following high school graduation, Peggy entered Mercy Nursing School at Denver, where she graduated three years later. She spent some time nursing in Florida before returning to the Julesburg area, where she worked as a Public Health Nurse.  On January 29, 1957, Peggy married Richard D. Rochlitz at St. Anthony of Padua Catholic Church in Julesburg. Their union was blessed with two children, Ryan and Megan. The family moved to South Dakota, where they farmed and ranched for ten years, before returning to Julesburg in the late 1960s. Peggy worked for many years with Doctor Lundgren, and their team became as a family over that time.  Peggy was a talented and dedicated nurse. She was both a perfectionist and nurturing. She helped deliver countless babies over the years and calmed the fears of innumerable people facing the dread of a blood draw or needle poke with her sure and steady hand.  Peggy was also a loving and dedicated mother. She was an accomplished seamstress, quilter, and cross stitcher. Peggy made many of the dresses and clothing for her children over the years. Her yard and garden was a kind of sanctuary for her, and she cared for them with the meticulousness that she applied to everything.   Peggy's Catholic faith was foundational in her life. That faith informed the way she cared for others and endured hardship. Peggy shared that faith in many ways, but one special way was by running the CCD program, which she did for many years.  Peggy was preceded by her nine siblings, Ellen, Mary, Rose, Virginia, Jack, Bill, Dugan, Pat, and Gene.   Survivors include her husband of 64 years, Richard of Julesburg; her children, Ryan of Julesburg; Megan (Bob) Carter of Spearfish, SD;  5 grandchildren, Macala (Rick), Monique (Matt), Thai (Morgan), Niki (Jason), Richie (Linsay); great-grandchildren, Gavin, Ensley. Arianna, Beaux, Matthew, Kane; along with many other relatives and friends. In lieu of flowers, memorials are suggested to St. Anthony of Padua Catholic Church in Julesburg. Condolences may be shared at prairiehillsjulesburg.com, where a recording of the service will be posted. Memorial Mass will be held on Monday, February 15, 2021, at 10 a.m. at St. Anthony of Padua Catholic Church in Julesburg with Fr. Mike O'Brien as Celebrant. No interment of Cremains is planned at this time. The Rosary will be recited at 9:30 a.m. at the church on Monday.  Prairie Hills Funeral Home of Julesburg is in charge of arrangements.

Peggy Ann Rochlitz, 92, of Julesburg, passed away February 9, 2021, at the Sedgwick County Nursing Home in Julesburg. Peggy was born December 2, 1928, at Julesburg, Colorado, to John and Margaret (Fletcher) Donnelly as one of ten children.  She... View Obituary & Service Information

The family of Peggy Ann Rochlitz created this Life Tributes page to make it easy to share your memories.

Send flowers to the Rochlitz family.