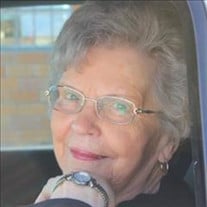 MARGARET COLE, 93 of Julesburg, CO, passed away Sunday, October 13, 2019 at the Sedgwick County Memorial Hospital in Julesburg. Margaret was born June 9, 1926, at Big Springs, Nebraska, to Albin and Margaret (Peterson) Walline. She graduated from Big Springs High School in 1943 and shortly thereafter started teaching in the "country schools" where she taught grade 1st thru 8th grades on one room. When those schools moved to town, she moved with them as an aid in the Julesburg Elementary School for 17 years. She worked for Dr. Lundgren and and Sedgwick County Medical Clinic for 20 years before retiring in 1993. In 1946, Margaret married Barnard Anderson, and their union was blessed with four children, Cindy, Perry, Bernita, and Kim. Following the death of her first husband, Margaret eventually met and married Richard Cole, and the two resided in Julesburg. Throughout Margaret's life, her family has always come first. For the last 20 years her entire family showed up for Thanksgiving for a weekend of making memories and having fun. She will be missed but never forgotten. Margaret was preceded in death by two spouses, Bernard Anderson and Richard Cole; her parents; two sons-in-law, Denny Wilber and Bob Owings; a brother, Jim; and two sisters, Charlotte and Roberta. Survivors include her children, Cindy Wilber of Chappell, NE Perry (Cherry) Anderson of Julesburg, Bernita Owings of Julesburg, Kim (Julie) Anderson of Firestone; 12 grandchildren, 23 great-grandchildren; 7 great-great-grandchildren; brother, Butch Walline of Julesburg; along with many nieces, nephews and friends. A memorial has been established in Margaret's memory for later designation. Condolences may be shared at prairiehillsjulesburg.com. Private graveside services will be held at the Julesburg Hillside Cemetery. A Celebration Of Life will be hosted by Margaret's family on October 18, 2019, at the Hippodrome Arts Center at 4:00 P.M. Prairie Hills Funeral Home of Julesburg is in charge of arrangements.

The family of Margaret Cole created this Life Tributes page to make it easy to share your memories.

Send flowers to the Cole family.