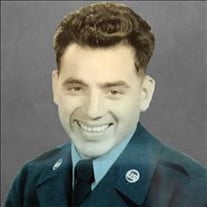 Manuel Nieto, age 88 of Julesburg, Co passed away Wednesday, March 7, 2018 at Sunset Manor in Brush, Co. Manuel was born April 1, 1929 to John P. and Vicente Martinez Nieto in Louisville, Co. Following his education, Manuel joined the United States Air Force where he was tech Sargent. He proudly served his country for 20 years, until his retirement in 1972. While in the service, Manuel met and married Ruth, and from this marriage they had two sons, Paul and Mike. While in the military, he served most of his years at McCord Air Force Base in Tacoma Washington. Throughout this time, he was able to live in Japan, Germany, and he also served in the Vietnam War. In 1973, his future wife, Olga, went to a tarot/palm reader, who told Olga that she was going to meet and marry a man that had two sons. Later that year, Manuel and Olga met, and in 1979 they were married. They had been happily married for 39 years until his death. In his younger years, he was a boxer. With the help of his trainer, Freddy Mays, he competed in 3 professional fights. He continued his boxing career in the military. He also learned how to play pool and became a professional pool player. He was in many pool tournaments and received many trophies. Most importantly, he met many people that became his friends. He always enjoyed when he could get together with Frank, Mike, George, Juan and many other friends. He also enjoyed a good game of golf with his buddy, Don. On one golf outing, they accidentally hit a beehive, and both threw down their golf clubs and ran downhill. He also liked bowling, gambling at the Long Acres Horsetrack, and going to Las Vegas to play the dice tables where his bets always came in. He enjoyed watching football on Sundays with plenty of snacks and beer. His favorite movie that he watched over and over again was the original King Kong. While doing all the things he loved, he was able to have his lovely wife, Olga, by his side. In 2010 Manuel and Olga moved to Julesburg to be closer to Olga's sister, Helen and her husband, John. The couple made good friends at their weekly coffee get-togethers at "All that Jazz." He was able to live life to the fullest before his Alzheimers diagnosis in October of 2017. He was preceded in death by his mother and father; brothers, Albert, Max, Joe, Paul and John; sisters, Emily and Bessie; and sisters-in-law, Emily, Edith and Cosette. He is survived by his wife, Olga; his sons, Paul (Kim) Nieto of Tacoma, Washington and Mike (Dorothy) Nieto of Atlanta, Georgia; three grandchildren, Michelle, Stephanie, and Brandon; his brothers, Max of Denver and Alfonso of California; sisters, Virginia, Delores, Mary, all of Denver, and Bertha of Texas. He is also survived by sisters-in-law, Helen Serrato of Julesburg and Audrey Resendez of Eureka, California; and numerous nieces, nephews, other relatives, and friends. A memorial has been established in his memory for later designation. Condolences can be shared online at prairiehillsjulesburg.com, where the service will be live streamed for those unable to attend. Mass of Christian Burial will be on Wednesday, March 14, 2018 at 11:00 am at St. Anthony of Padua Catholic Church in Julesburg with Father Michael O'Brien as Celebrant. Burial with military honors will be at Fort Logan National Cemetery in Denver. Visitation will be on Tuesday the 13th from 1:00pm to 5:00pm at Prairie Hills Funeral Home. A Rosary will be held that evening at 7:00pm at the church. Prairie Hills Funeral Home of Julesburg is in charge of arrangements.

The family of Manuel Nieto created this Life Tributes page to make it easy to share your memories.

Send flowers to the Nieto family.