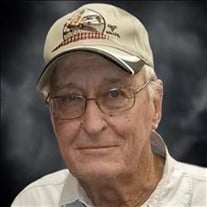 LYLE EDWARD BLOCHOWITZ, of Julesburg, passed away December 3, 2020. Lyle was born December 14, 1939, at Hallam, Nebraska, to Edward and Lillie (Geistlinger) Blochowitz. They moved south of Julesburg and established the family farm when Lyle was 2. He graduated from Julesburg High School with the class of 1957. On December 1, 1968, Lyle married Kay Rasmussen at Holyoke, CO. Their union was blessed with three children, Connie, Kyle, and Kody. The couple farmed in the area their entire married lives. Farming was in Lyle's blood. He was both a talented and tireless worker. When he wasn't farming, Lyle enjoyed welding and did so often over the winter months, making machinery that was shipped all over the country. He always kept busy; when he wasn't farming or welding, you might have found Lyle hauling or digging beats or chasing cows. In addition to his talent for welding, Lyle also had a keen ear for music and could play both the piano and the accordion by ear. He had also developed an unlikely skill for jet skiing, considering he couldn't swim. Lyle also enjoyed fishing, raising a vast spectrum of livestock, and playing games and cards. Lyle was all about spending quality time with his family, even if the quality time was spent milking goats. He also had a great love and enjoyment for his gold '67 Chevelle, which he bought new, and cared for like it was one of his kids. Lyle was a gentle, quiet, and warm presence. He had found great peace through his faith in Jesus Christ. As a result, he typically wore a smile. He was very slow to anger, and because he didn't waste his speech, or anything else for that matter, when he had something to say, people listened. Lyle had served faithfully as an elder at the Julesburg Christian Church, who appreciated him greatly for his faith, wisdom, and level-headedness. For a man who didn't speak in volumes, much could be written and yet still be insufficient. Lyle will be dearly missed by his family, both church and extended, and by his many friends. Lyle was preceded in death by his parents and in-laws, Julian and Lily Rasmussen. Survivors include his wife, Kay of Julesburg; children, Connie (Bob) Brown of Crook, Kyle (Jennifer) Blochowitz of Julesburg, Kody (Heidi) Blochowitz of Julesburg; eight grandchildren, Athena (Brandon), Ashley (Austin) and Autumn, Noah, Gavin, Aleah, Karsen, Emeri; 2 great-grandchildren, Emerson, Everest; Sister, Shirley Blochowitz of Julesburg; along with many other relatives and friends. A memorial has been established in Lyle's memory for later designation. Condolences may be shared at prairiehillsjulesburg.com, where a recording of services will be posted. Celebration of Life Open House will be on Wednesday, December 9, 2020, from 2 p.m. until 4 p.m. at the Julesburg Christian Church. No interment of Cremains is planned at this time. Prairie Hills Funeral Home of Julesburg is in charge of arrangements.

The family of Lyle Blochowitz created this Life Tributes page to make it easy to share your memories.

Send flowers to the Blochowitz family.