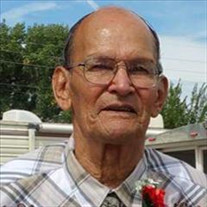 LEROY LEE MCLEAN, 79 of Sedgwick, passed away Thursday, January 24, 2019 at the University of Colorado Hospital in Aurora, CO. LeRoy Lee McLean was born on April 11, 1939 to Alice Mabel McLean (Spearbeck) and Clement Lester McLean in Aberdeen South Dakota. Lee was a proud member of the Rosebud Indian Reservation in South Dakota, he was always proud of his Lakota Sioux heritage. Lee attended Central High School in Aberdeen, SD where he completed 2 and 1/2 years, he did not graduate but instead on May 22nd, 1957 joined the United States Marine Corps at the age of 17. After his Marine Corps time he moved to Denver Colorado where he taught himself Auto Mechanics and worked at a small gas station/auto repair shop. It was here that he meant Connie Jean Johnson and married her on April 5th 1961. During this union they had four girls, Shannon, Lee Ann, Kerrie and Samantha. Lee was a jack of all trades, he trained thoroughbred horses and ran them at the old Centennial Race Track in Littleton Colorado, with success. In October of 1976 Lee moved his family to Sedgwick, where he had been hired to train Thoroughbreds for a local breeder. After that he worked at AgriChem in Julesburg, he then took over the 105 Legion, and ran that for many years. He also ran the Hilltop Conoco in Sedgwick, many times travelers would stop for gas, being short of money or had fallen on hard times Lee would pay for their gas out of his own pocket, or repair their cars for no charge, he had a heart of gold. Although his girls grew up and moved away, Lee chose to stay in Sedgwick, he called it home for 42 years, in 2015 Lee was chosen as the Honored Citizen of the Sedgwick Harvest Festival, he was so proud of that honor. Lee is survived by two brother's Lester McLean and Harold McLean, one sister Greta Ware, his four daughters, Shannon Maxwell (Gregg Maxwell), Lee Ann Morris (Jim Morris), Kerrie Burns (Phil Burns), and Samantha Mills (David Mills), seven grandchildren, Nissa Maxwell (Eric Jansen), Kory Mills, Brandon Schneider, Makayla Mills, Ravyn Burns, Taylor Burns, and Katelynn Maxwell, and one great granddaughter, Lorelai Jansen. And many nieces and nephews, he was especially close to his sister's (Nona) daughter Sondra and her two children Tasia and Damien, who grew up with us. He was preceded in death by his parents Clement McLean and Alice Allen, two sisters Twyla and Nona. A memorial has been established in his memory. Condolences can be shared at prairiehillsjulesburg.com. Graveside services will be held on Saturday, February 2, 2019 at 10:00 am at the Sedgwick Cemetery. Prairie Hills Funeral Home of Julesburg is in charge of arrangements.

The family of LeRoy Lee McLean created this Life Tributes page to make it easy to share your memories.

Send flowers to the McLean family.