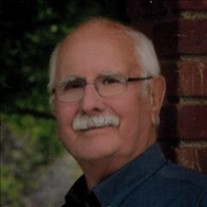 KEITH E. ONKEN, 79, of Ovid, CO, passed away Sunday, January 2, 2022, at North Colorado Medical Center at Greeley, CO. Keith was born on November 10, 1942, on the family farm in rural Lodgepole, Nebraska, to Armin and Minnie (Folkerts) Onken. He went to grade school in Lodgepole and graduated from Sidney High School. Keith married Sharon J. Shoopman on July 12, 1961, at Sterling, CO. Their union was blessed with two daughters, Pamela and Camilla. Keith worked at the family-owned "Onken's Gas Station" in Sidney until 1962 when he went to work at Kansas-Nebraska Gas Company. In 1967, Keith took a transfer to Colby, Kansas, where he worked as a meter shop foreman. A few years later, the family moved to Ovid, CO, where Keith worked for KN Energy as a large-capacity Meterman. His work took him all over much of Colorado and western Nebraska. In 2001, Keith retired after 38 years of service. He loved spending time with family and friends at Lake McConaughy camping and had a cabin for the last 30 years. Keith enjoyed playing the guitar and reading, playing Soduko, and working on his computer. He loved to visit and have coffee with friends and was also a longtime member of the Elks Club. Keith often served as a volunteer at the Julesburg Welcome Center in his free time, which he did with regularity for 18 years. Keith was preceded in death by his parents; brother Kenneth, sister Sharon; son in law, Earl Hauge. Survivors include his wife Sharon of Ovid; daughters Pamela Hauge of Sidney, Camilla McElhinney of Greeley; grandchildren, Randa (Jeff) Doty, Ashlee (Garrett) Melton, Ryan Keith (Katie) Wieser, Kelsey (David) McElhinney-Shirazi, Kyle McElhinney, great-grandchildren, Bodhi, Easton, Ryker Melton, and Kellen & Kyla Doty and two great-grandchildren on the way; sister Connie Benzel of Sidney, Gladys (Mike) Hartzler of Sidney, and many nieces, nephews, other relatives and friends. Memorials are suggested to the Ovid Methodist Church in Keith's memory. Condolences may be shared at prairiehillsjulesburg.com. Funeral Services will be Friday, January 7, 2022, at 10:30 am at the Ovid Methodist Church with Pastor Ceciliah Igweta officiating. Interment will follow in the Greenwood Cemetery at Sidney, NE. Visitation will be Thursday, January 6, 2022, from 2 pm to 6 pm at the Prairie Hills Funeral Home Chapel in Julesburg. Prairie Hills Funeral Home of Julesburg is in charge of arrangements.

The family of Keith E Onken created this Life Tributes page to make it easy to share your memories.

Send flowers to the Onken family.