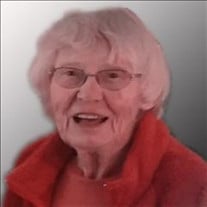 Kathryn Eileen Hazlett, 84, of Chappell, NE, passed away at Regent Park Nursing Home in Holyoke, CO, on Sunday, April 17, 2022. Memorial services will be held on Saturday, April 23, 2022, at Berea Lutheran Church at 11:00 AM, officiated by Pastor Scotty Ray. Kathryn was born on March 8, 1938, to George and Alice (Miller) Bove. She was born in Chappell in the house she lived in until entering the nursing home. Kathryn was baptized on December 17, 1939 in the Chappell Court House and confirmed on May 24, 1953 at the Grace Lutheran Church in Chappell, NE. Kathryn went to the country school and graduated from Deuel County High School in 1955. After receiving her diploma, she went on to further her education at Midland Lutheran College in Fremont, NE. At Midlands, she received her Teaching Certificate after 2 1/2 years. She did her student teaching in Oshkosh Public Schools, where she became a teacher for three years before moving to the Kimball Public School system. She married Robert Hazlett in February of 1964 in Chappell, and they made their home east of Chappell in 1968 until entering the nursing home in 2020. She loved being a wife, mother, sister, aunt, and friend of many. She is survived by her husband, Robert, of 58 years. Her three children: Cheryl Brunz (Kevin) of Scottsbluff, NE; David Hazlett (Sherri) of Ft. Morgan, CO; Karen Hazlett (Christopher) of Richmond, ME. Grandchildren: Kayleena Johnson (Brooke) of North Platte, NE; Elyshia Harris (David) of Julesburg, CO; Theresa Cook (Cameron) of Pierre, SD; Jacob Hazlett (Alanna) of Joplin, MO; Jordyn Welch (Keith) of Greeley, CO. 12 great-grandchildren with one on its way in May. Sister, Ruby Davis of Puyallup, WA. Numerous nieces, nephews, and many other relatives. Kathryn was preceded in death by her parents, Uncle Herman Miller, brother-in-law, and other aunts and uncles. A memorial has been established in Kathryn's memory for later designation. Condolences may be shared at prairiehillsjulesburg.com, where the service will be streamed live. Prairie Hills Funeral Home of Julesburg is in charge of arrangements.

Kathryn Eileen Hazlett, 84, of Chappell, NE, passed away at Regent Park Nursing Home in Holyoke, CO, on Sunday, April 17, 2022. Memorial services will be held on Saturday, April 23, 2022, at Berea Lutheran Church at 11:00 AM, officiated by... View Obituary & Service Information

The family of Kathryn Eileen Hazlett created this Life Tributes page to make it easy to share your memories.

Kathryn Eileen Hazlett, 84, of Chappell, NE, passed away at Regent...

Send flowers to the Hazlett family.