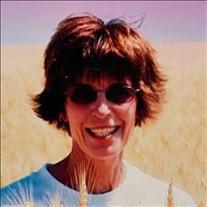 JUDITH WEAVER, of Julesburg, passed away September 10, 2021, at the Sedgwick County Hospital in Julesburg. Judy was born May 28, 1942, at Lansing, Michigan, to Francis R. and Marjorie E. (Sontag) Gibbs. She graduated from St Mary's Catholic School with the class of 1960. On July 3, 1960, Judy married Glenn Weaver, and their union was blessed with two children, Tim and Anne. The couple raised their family in Michigan, and in 1980, moved to Mesa, AZ for a time before eventually relocating to Julesburg to begin working for Carlson Ranch Company. In recent years, Judy organized tour stops around the nation for world-renowned horseman Chris Cox. Judy was tough and gritty and unvarnished, more like burlap than silk. She was a strong woman that loved the prairie, riding horses, and tending livestock. Judy knew what she wanted and when her heart and mind were set to purpose, she was fiercely willful. She didn't take no for an answer and held her convictions more tightly than most. Judy was firm in her integrity and exacting in her standards. Though she was not frilly, Judy also had a capacity for tenderness, though rarely revealed. She was deeply faithful and committed to her Catholic faith and attended Mass daily when she could. She loved to spend time in the garden and had a talent for ceramics. Judy was also gifted with a beautiful singing voice which she happily lent to the church choir for many years. Judy often remarked that she was born 100 years too late. She was a prairie thistle planted amid a domestic garden bed. In the end, Judy trusted God's timing and intent in all things, and behold; He has made everything beautiful in its time. Judy was preceded in death by her parents. Survivors include her husband, Glenn of Julesburg; children, Tim (Dena) Weaver of Pocatello, ID, Anne Weaver of St Johns, MI; grandchildren, Sara, Josh, Glen, and Garrett; great-grandchildren, Khaleesi, Logan, and Lincoln; sister, Nancy (Thomas) Thelen of Lyons, MI; along with numerous nieces and nephews, especially Tom, Marti, Margie and Amy and their spouses and many dear friends. In lieu of flowers, memorials are suggested to St. Anthony of Padua Catholic Church in Judy's memory. Condolences may be shared at prairiehillsjulesburg.com, where the services will be streamed live. Funeral Mass will be on Tuesday, September 14, 2021, at 10:30 am at St. Anthony of Padua Catholic Church in Julesburg, with Fr. Mike O'Brien as Celebrant. Interment will be in the Sedgwick Cemetery. Visitation will be on Monday, from 5-7 pm, at the Prairie Hills Funeral Home in Julesburg. Recitation of the Rosary will begin at 7 pm at the funeral home. Prairie Hills Funeral Home of Julesburg is in charge of arrangements.

JUDITH WEAVER, of Julesburg, passed away September 10, 2021, at the Sedgwick County Hospital in Julesburg. Judy was born May 28, 1942, at Lansing, Michigan, to Francis R. and Marjorie E. (Sontag) Gibbs. She graduated from St Mary's Catholic... View Obituary & Service Information

The family of Judith A Weaver created this Life Tributes page to make it easy to share your memories.

Send flowers to the Weaver family.