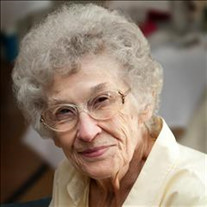 Joyce Darling Lakey was born on June 1, 1932 in Longmont, Colorado and passed to eternal life on Saturday, May 4, 2019 at the age of 86. Her parents were George B. Alberts and Letta Mae Reese Alberts. Joyce was one of five siblings. The family moved often for her father's employment, but Joyce lived most of her life in Colorado. She loved to sing, and hoped one day to be a big band singer. That didn't work out for her, but she continued to love music and sang in church as often as possible. After high school, Joyce married Oliver E. Jones of Longmont. To this union was born a daughter, Jo Dee. Oliver joined the Air Force and became a fighter pilot during the Korean conflict. When his plane was shot down, Joyce became a widow. She and Jo Dee lived with the Jones family in Longmont for a time following Oliver's death, then moved back to Loveland, where her parents and younger siblings were living. During that time, she reconnected with an old acquaintance from her years at Loveland High School, Dean Lakey. They were married, and moved to Lyons, Colorado for Dean's job as a miner. The family grew with the birth of their son, Dwight. Later, they returned to Loveland, and in 1960, Dean joined the Colorado State Patrol. The family moved again, this time to Julesburg. The Lakey's soon settled in and became members of the community. Joyce learned that being the wife of a law enforcement officer meant a real sacrifice, but she was always supportive of Dean's career, in spite of the long work hours and night shifts. Joyce was primarily a stay-at-home mother, but when her children got older, she worked at the Brown Hotel restaurant, The Little Brown Jug, later moving to the restaurant at the Platte Valley Inn. She loved meeting people, and found her employment to be the perfect opportunity to see local friends and make new ones every day. She looked forward to seeing several travelers who stopped in year after year on their way through, and she loved her local regulars. She also worked with many young people from the Julesburg area, and she cared about them as if they were her own kids. As a member of Grace Baptist Church, Joyce was a faithful high school Sunday school teacher and youth group leader. When the Awana program started, she jumped in as a member of the ministry team. She adored the young children in the program, and felt that sharing the good news of Jesus' love was one of the most rewarding things she had ever done. When Joyce and Dean became grandparents, they enjoyed traveling to see their four grandchildren as often as they were able, spending many fun times with them in Vermont and Colorado. They were delighted with the addition of great grandchildren. Joyce followed their lives closely, and bragged about them to anyone who would listen. Joyce spent several years caring for Dean as his health failed, and he became homebound. She was a caring and compassionate wife to the very end. Her last years were enriched by dear friendships, which kept her going. Joyce was predeceased by her parents, George and Letta Mae Alberts and her parents-in-law Dwight E. and Helen Bickett Lakey, her older brother George F. Alberts and his wife, Donna Kennedy Alberts, sister-in-law Edythe Joyce Erlandson Alberts, brother-in-law Jerome A. Radcliffe, and nephew Arthur Alberts. She is survived by her children, Jo Dee Jones Smee and her husband Stephen W. Smee of Arvada, CO and Dwight E. Lakey and his wife Sharon Schiffner Lakey of Danville, VT; grandchildren Rachel Lakey Laundon and her husband Sage Laundon of Waterbury, VT; Gabriel P. Lakey and his wife Kathleen Fitzwilliam of Salt Lake City, UT; Solomon D. Lakey and his wife Christa Gardner Lakey of Deerfield, MA, Anne Jordan Smee Ames and her husband Romny D. Ames of Arvada, CO; great grandchildren Rowan W. Ames and Reese D. Ames of Arvada, CO, and Peter W. Lakey and Beatrice H. Lakey of Deerfield, MA; brothers Thomas B. Alberts of Poway, CA and William E. Alberts and his wife Ardyce Beachy Alberts of Portland, OR; sister Linda Alberts Meyers and her husband Edward C. Meyers of Perkasie, PA; sister-in-law Joyce Elayne Lakey Radcliffe of Arvada, CO and numerous nieces and nephews. A Celebration of Life service will be held Saturday, May 25 at 2:00 PM at the Julesburg Christian Church, 122 W. 5th St. in Julesburg, Colorado, with inurnment in the Hillside Cemetery. Memorial contributions may be sent to the Awana Club in care of the Christian Church of Julesburg, P. O, Box 226, Julesburg, CO 80737 or to the Gateway Medical Foundation, Sedgwick County Health Center, 900 Cedar St., Julesburg, CO 80737. Prairie Hills Funeral Home of Julesburg is in charge of arrangements.

Joyce Darling Lakey was born on June 1, 1932 in Longmont, Colorado and passed to eternal life on Saturday, May 4, 2019 at the age of 86. Her parents were George B. Alberts and Letta Mae Reese Alberts. Joyce was one of five siblings. The family... View Obituary & Service Information

The family of Joyce Darling Lakey created this Life Tributes page to make it easy to share your memories.

Send flowers to the Lakey family.