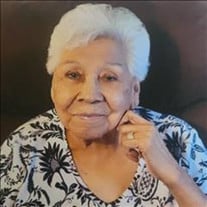 JOSEFINA M. GUZMAN, 89, of Julesburg, CO, passed away Thursday, May 5, 2022, at her home. Josefina was born June 13, 1932, at Matamoros Tamaulipas, Mexico to Antonio and Juana (Alvarados) Mendoza. In June of 1949, Josefina married Trinidad Vicente Guzman, and their union was blessed with six children. Josefina later married Juan Antonio Guzman Sr. on November 4, 1964. They would be blessed with three children. In 1961, the couple moved to Julesburg to pursue a better life. Josefina went to work at TRW for a number of years, splitting time also to work at the Flying J truck stop. Josefina was a tireless worker and matriarch of her family. She suffered a great many hardships throughout her life, including burying many of her children. Josefina expressed love through subtleties at times, understated but always sincere. Being tough was necessary for the circumstances she faced in life, but in God's time, she softened and was able to show new aspects of herself that her family celebrated. Josefina was a rock and pillar for her family, both in her example and prayerfulness. Josefina was preceded in death by her parents, and children, Jose Guzman, Jesus Guzman, Alvaro Guzman, Lucy Guzman, Blanca Ramos, and Rachel Granillo; siblings, Ernesto Mendoza and Naomi Garcia. Survivors include her two sons, Juan Guzman Jr., of Julesburg, Samuel Guzman of Julesburg; daughter, Amalia Diaz of Kearney, NE; 16 grandchildren; numerous great-grandchildren; siblings, Rebecca Sanchez of West Jordan, UT, Anita Guzman of Brownsville, TX; son-in-law, Denny Granillo of Julesburg; along with many other relatives and friends. A memorial has been established in Josefina's memory for later designation. Condolences may be shared at prairiehillsjulesburg.com, where the services will be streamed live. Funeral services will be on Saturday, May 14, 2022, at 10:30 am at the Prairie Hills Funeral Home Chapel in Julesburg, with Pastor Kerry Johnson and Feliz Reyes officiating. Interment will be in the Hillside Cemetery at Julesburg. Visitation will be on Friday, from 5 pm to 7 pm, at the Prairie Hills Funeral Home in Julesburg. Prairie Hills Funeral Home of Julesburg is in charge of arrangements.

The family of Josefina M. Guzman created this Life Tributes page to make it easy to share your memories.

Send flowers to the Guzman family.