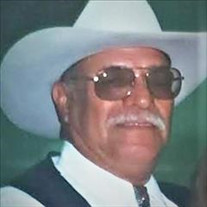 On Monday, May 4, 2020, John G. Hernandez passed away at the age of 86. He was a loving husband, father of 6 children, sibling of 12, grandfather to 14 and great grandfather to 16. John was born on October 20, 1933 in Ovid, CO to Ignacio and Maria Hernandez. On May 9, 1953 he married Sara Garcia, and the two raised 3 sons-Johnny, James, and Frankie; and 3 daughters-Cynthia, Patricia, and Diane. John worked as a pen rider and supported the ranch veterinarian for over 10 years in Brule, NE. In 1969 John moved his family to Ovid, where he worked at the Great Western Sugar Factory and also took a full time job for the Sedgwick County Irrigation District for 45 years. He was a farmer's helper and maintained the Ovid Cemetery for a few years. His work ethic was rare, and one not seen by many. He took such pride and joy in everything he did. He did it not only for himself, but for his family. This trait has been, and will continue to be passed on to generations to come. More than anything, John took the most pride in his family. He was a remarkable role model for making sure his family stuck together, loved one another, and respected our elders and each other. John never missed a family gathering. If he knew about it, he was there! He was a man of his word, and someone you could always count on. He was always there to help, support, and give encouragement to his children, grandchildren, and great grandchildren. Throughout his life, John has touched and moved so many with his presence. He will be remembered fondly, and deeply missed. The memory of John Hernandez will truly live on in his family, and everyone impacted by the amazing man he was. John is survived by his wife Sara Hernandez, and their six children: Cynthia Hernandez-Ipsen, Johnny (Michelle) Hernandez, Patricia (Tim) Case, James (Brenda) Hernandez, Frankie Hernandez, and Diane (Majid) Ashouri. He is also survived by his grandchildren: Joshua, Sebastian, Toni, Mickel, Celso, JJ, Robert, Jessica, Jamie Lee, Justin, Juliana, Demiah, and Tammera. Brothers: Paul, Chris, Harry, Michael, and Mark. Sisters: Toni, Irene, Alice, Angel, Mary Joe, as well as his great grandchildren, nieces, nephews and extended family and friends. He was preceded in death by his parents Ignacio and Maria Hernandez, two brothers Nick and Fred Hernandez, son-in-law Brian Ipsen, grandson Ignacio Hernandez, as well as many other beloved family members. A Private Family Memorial Mass will be Saturday, May 30, 2020 at St. Anthony of Padua Catholic Church in Julesburg, CO with Father Mike O'Brien as Celebrant. Interment of Cremains will be in the Hillside Cemetery in Julesburg, CO. Memorials in John's memory will be donated to the American Kidney Fund at 11921 Rockville Pike Suite 300. Rockville, MD 20852. Condolences can be shared at prairiehillsjulesburg.com. Prairie Hills Funeral Home of Julesburg, CO is in charge of arrangements.

The family of John Hernandez created this Life Tributes page to make it easy to share your memories.

Send flowers to the Hernandez family.