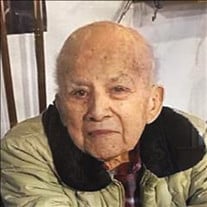 JOHN DOMINGUEZ, of Fort Morgan, CO, passed away Tuesday, December 14, 2021, at East Morgan County Hospital in Brush, CO. John was born on December 17, 1925, to Jose and Virginia (Alcantar) Dominguez in Modesto, CA. They moved from California to Sedgwick, CO, where he resided with his family until he married the love of his life, Elvera Aguiniga, on July 23, 1950, in Julesburg, CO. They then moved to Sunol, NE, where John was employed with the Union Pacific Railroad. They later moved to Sidney, NE, where he retired in 1987 after 37 years. He was a mechanic and enjoyed working on cars, lawn and boat motors. He was a full-time fisherman enjoying his time at the lake with his son Joe and his grandsons and nephews. He was preceded in death by his parents Jose and Virginia; his siblings, Mary Velasco (Pete), Raymond Dominguez (Carmen), Manuela (Nellie) Alvarez, and Tomasa Marquez. Survivors include his wife Elvera Dominguez of Ft. Morgan, CO, formerly of Sidney, NE; sister, Margaret Perez of Topeka, KS; his children, Joe Dominguez (Sandy), Martha L Dominguez Gonzalez, (Gabriel), and Mary Carrillo (Sergio); grandchildren, Rosamaria Delgado (Jose), Rebecca White (Brian), Roxana Gonzalez, Avila (Sergio) and Frank Romero (Rachel); great-grandchildren, Brendon White and (Jennifer), Alejandro Gonzalez Avila, Cruz Delgado, Emilio Romero, Seidy and Angelica Avila, Lexus Delgado, Ana Avila, Jason Romero, Reina Avila, Ashlynn White, Giselle Delgado, and Gianna Romero; great-great-grandchildren Aliyah Bear and Claire White. A memorial has been established in John's memory for later designation. Condolences may be shared at prairiehillsjulesburg.com, where the service will be streamed live. Visitation will be held on Tuesday, December 21, 2021, at Prairie Hills Funeral Home Chapel in Julesburg, CO, from 4 to 6 pm. Funeral Mass will be on Wednesday, December 22, 2021, at 10:30 am at St. Anthony of Padua Catholic Church in Julesburg, with Fr. Herman as Celebrant. The Rosary will be recited at 10:00 am at St. Anthony of Padua Catholic Church. Interment will be at the Sedgwick Cemetery in Sedgwick, CO. Prairie Hills Funeral Home of Julesburg is in charge of arrangements.

The family of John Dominguez created this Life Tributes page to make it easy to share your memories.

Send flowers to the Dominguez family.