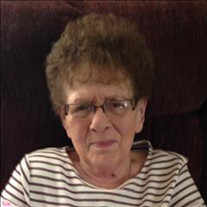 JOANNE LAMBRECHT, 84 of Ovid, passed away Saturday, July 21, 2018, at the Sedgwick County Memorial Hospital in Julesburg. Joanne was born March 19, 1934, in Gillette, Wyoming to Kenneth and Norma (Fitch) Peterson. She graduated from Ovid High School with the class of 1952. In May of 1952, Joanne married Richard Sittner. Their union was blessed with three children, Kathy, Kenneth, and Kim. Joanne worked with Rich on the family farm and ranch until Rich passed away in May of 1970. Joanne also worked part-time at the Post Office in Ovid beginning in October of 1962. She would eventually marry Alex Lambrecht in February of 1976, and the couple made their home in Ovid. Joanne served as the postmaster in Ovid for many years, retiring in October of 1992. After she retired she worked part time at D & L Meat preparing rocky mountain oysters. She really enjoyed the "nut ladies" she worked with. The focal point of Joanne's life was always her family, who she lived for. Joanne loved attending the events of her grandchildren and great grandchildren over the years, and proudly sported her Revere and then Sedgwick County Cougars' shirts when attending their games. Even when she got to the point where she could not physically attend their games, she would put her Cougar shirt on and listen to the games on the radio. Joanne had a competitive spirit that never diminished. When her team wasn't fairing well, she would turn the radio off for awhile, fix a rum and coke, and then tune back in. She also enjoyed rooting for her great grands who play for and swim for the Brush Beetdiggers, Wiggins Tigers and Holyoke Dragons. When it came to her grandchildren and great grandchildren, she was fully invested and cherished every minute she got to spend with them. From attending their games, watching them show their animals at the fair, birthday parties, or holidays, it didn't matter to Joanne, as long as her family was present. She felt blessed that all of her children, grandchildren and great grandchildren lived so close to her. She was also a great lover of animals, especially her cat, Socksy. She was the heart and soul of our family. We loved her so much. She will be greatly missed. Joanne was preceded in death by her husbands Richard Sittner and Alex Lambrecht; her parents; and her sister and brother-in-law, Jeanne and Dean Sittner. Joanne is survived by her children, Kathy (Terry) Sanger of Sterling, Kenny (Doris) Sittner of Ovid and Kim (Jerry) Kingman of Holyoke; six grandchildren, Shannon (Daryl) Rusher, Shawn (Mike) McKinley, Kendra (Stacy) Woodhams, Billie (David) Carlson, Rena (Dustin) Schneller and Jerad (Jeanette) Kingman; 18 great-grandchildren, Madison and Logan Kerr, Colton and Pepper Rusher, Cole and Cade McKinley, Tyler, Colten and Alison Woodhams, Dalton, Nolan, Jaxon and Ryen Carlson, Rylee, Ethan and Rorey Schneller and Jordan and Jocelyn Kingman; sister-in-law, Betty Powell of Ovid; along with many other relatives and friends. In lieu of flowers, memorials can be made to the 72 Foundation, a Revere scholarship fund, in Joanne's memory. Condolences may be shared at prairiehillsjulesburg.com. Memorial services will be held on Friday, July 27, 2018, at 3:00 p.m. at the Prairie Hills Funeral Home Chapel in Julesburg with Pastor Art Roth officiating. Inurnment will be in the Ovid Cemetery. Prairie Hills Funeral Home of Julesburg is in charge of arrangements.

The family of Joanne Lambrecht created this Life Tributes page to make it easy to share your memories.

Send flowers to the Lambrecht family.