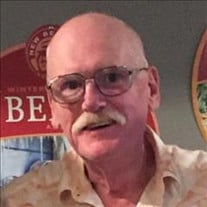 JIM D. ZIEGLER, 64 of Julesburg, passed away Sunday, September 29, 2019, at his home in Julesburg. Jimmie (Jim) Dale Ziegler was born November 29,1954 in Julesburg. He was the first of two sons born to Harold and Carolyn (Williamson) Ziegler. Jim will be remembered for his quick wit, passion for cars, and love for his family. Before his last drive on the highway of life, Jim recalled some of his favorite memories, including time spent with his maternal grandparents (Dale and Blanche Williamson) who lived just up the road from his parents. Jim and his "baby brother" Clint spent nearly every waking hour at their house and greenhouses. With the river as a back yard and the rolling hills in the front, there was always something to explore. Jim opined that he did not recall a lot about his grade school and high school days, and he therefore must have emerged from them relatively unscathed. He did, however, vividly recall buying his first car: a 1963 Chevy Belaire four door that ran well but needed a fresh coat of paint. Jim recruited his brother Clint to help with the sanding and his dad did the painting. For Jim, that car represented more than a new-found independence; it also awoke a creativity in him. He carried the passion for fixing up old cars the rest of his life. After spending some time on the West Coast seeking fame and fortune, and after working for a motorcycle company, homesickness pulled him back to Sedgwick County. In February of 1980, Jim began working part time at the greenhouses he grew up around. He also began seasonal work with Great Western Sugar that fall. In early 1981, he met Bonnie Kinoshita Burkholder; they were married that spring. She brought three children from her previous marriage (Lynelle, Tyler, and Brandi), and by August of 1985 the couple added a child of their own (C. J.). In 1987, Jim, Bonnie, and company moved to Ovid where they spent 21 years. During those years, Jim recounted how he had the honor to serve on the town board, to serve as mayor, to serve in the fire department, and to serve as part time scout leader, not to mention host to the many post prom parties (apparently glitter is still in the floorboards!). The couple moved again in 2008, this time to Julesburg. Bonnie passed away unexpectedly in January the following year just short of their 28th wedding anniversary. Jim detailed the time after Bonnie's passing as one of shell shock. In the summer of 2009 he ran across Sue Amy. As childhood friends, the two played in the greenhouses, getting muddy until time for her to go. Jim and Sue were married in early 2010. Jim's last decade was spent with his "Susie." They loved being close to the mountains and taking trips up to Estes Park at every chance. He recalled that days like those to Nederland for a good cup of coffee at the Caboose were always special. He loved working on his trucks, going to car shows, and hanging out at the lake with Clint and Leatte and the rest of the family. He found joy in watching the garden grow and, ironically, at yelling at the TV during football season. Jim was preceded in death by his father Harold Ziegler, his mother Carolyn Williamson, stepdaughter Lynelle Burkholder, daughter Monica, granddaughter Alisson, and favorite cousin Bob Ziegler, as well as mother-in-laws Catherine Amy and Delma Kinoshita. He is survived by his loving wife, Sue Amy of Julesburg; brother, Clinton (Leatte) Ziegler of Ogallala; son, C.J.Ziegler of Sterling, stepson, Tyler (Bobbi) Burkholder of Julesburg, stepdaughter, Brandi (Jeremy) Bailey of IA, stepson, Ben (Dani) Fowler of Julesburg, stepdaughter, Cecelia Guerrie of Centennial; grandchildren, Liberty, Bodie, Boon, Shawn, Maggie, Porter, Kaleb, and Emily; mother-in-law Donna Alexander, and numerous family who cherished him. A celebration of life for Jimmie Dale Ziegler will be held at the Hippodrome on Saturday, October 12, 2019. Honoring Jim's memory and his love for cars, a parade of cars (old and new) will leave from the Hippodrome at 10:00 am. Participants are asked to return to the Hippodrome for a celebratory memorial at 10:30 am, and if able, to dress in hot rod or Steelers t-shirts. Lunch will be provided. A memorial fund has been established in Jim's honor, and monies should be directed to the Fort Sedgwick Historical Society and the Hippodrome cruise night in his name. Condolences may be shared at prairiehillsjulesburg.com. Prairie Hills Funeral Home of Julesburg is assisting the Ziegler family.

JIM D. ZIEGLER, 64 of Julesburg, passed away Sunday, September 29, 2019, at his home in Julesburg. Jimmie (Jim) Dale Ziegler was born November 29,1954 in Julesburg. He was the first of two sons born to Harold and Carolyn (Williamson) Ziegler.... View Obituary & Service Information

The family of Jimmie Dale Ziegler created this Life Tributes page to make it easy to share your memories.

Send flowers to the Ziegler family.