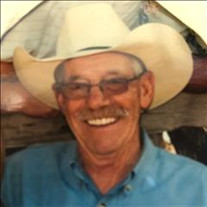 JAY HOLLINGSWORTH, 64, of Sedgwick, Colorado, passed away May 5, 2020, at the Sedgwick County Health Center in Julesburg with his family by his side. Jay battled a long and hard fight with cancer. Jay was born on August 17, 1955, at Holyoke, Colorado, to Gene and Agnes Hollingsworth. He graduated from Revere High School with the class of 1973. Jay married Terrie Markussen on July 18, 1975, at Ovid, Colorado. Their union was blessed with three children, Brad, T.J., and Ryan. The family made their home in Ovid, Fort Morgan, and Sedwick. Jay worked at the Co-op in Ovid after graduating high school. In 1974, he started working for Great Western Sugar Co., until they closed. Jay then worked in construction until Western Sugar brought him back to work in 1985, at Fort Morgan. In 1998, he was transferred to Holyoke and was there until he decided to start his own welding business. Eventually, Jay went back to work at the feedlots, as that's where his passions were. Jay was preceded in death by his parents, Gene and Agnes Hollingsworth; sisters, Peggy Douglas and Sharon Johnstone; and brother, Lon Hollingsworth; and several sisters-in-law. Survivors include his wife, Terrie of Sedgwick; sons, Brad (Tabatha) of Albin, WY, T.J. (Lindsey) of Cheyenne, WY, and Ryan (Kelly) of Noblesville, IN, and Danny Elwood and family of SD. Jay had three amazing grandkids that he adored, Walker, Brianna, and Stockton, that would light up his eyes and heart. He is also survived by several nieces, nephews, sisters-in-law, a brother-in-law, and a mountain of friends that were also his family. In lieu of flowers, a memorial has been established in Jay's memory for later designation. Condolences may be shared with the family at prairiehillsjulesburg.com. A private family graveside service will be held in the Sedgwick Cemetery on Tuesday, May 12, 2020. Prairie Hills Funeral Home of Julesburg is in charge of arrangements.

JAY HOLLINGSWORTH, 64, of Sedgwick, Colorado, passed away May 5, 2020, at the Sedgwick County Health Center in Julesburg with his family by his side. Jay battled a long and hard fight with cancer. Jay was born on August 17, 1955, at Holyoke,... View Obituary & Service Information

The family of Jay Hollingsworth created this Life Tributes page to make it easy to share your memories.

JAY HOLLINGSWORTH, 64, of Sedgwick, Colorado, passed away May...

Send flowers to the Hollingsworth family.