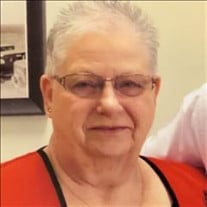 Janet Marie Strasser (Radke), 73, of Holyoke, CO, passed away on December 6, 2021, at Melissa Memorial Hospital in Holyoke, CO. Janet was born on December 17, 1947, to Raymond and Evelyn Radke (Lempke). Janet was one of ten children born to Raymond and Evelyn. On November 26, 1967, Janet married the love of her life, Walter Strasser. They were blessed to spend 54 wonderful years together. Of this union, five children were born. Sheila (Glenn) Schaffer of Chehalis, WA, LaVonne (Terry) Andersen of Holyoke, CO, Brian (Lisha) Strasser of Omaha, NE, Denise (Anthony) Strasser of Meridian, ID and Scott (Toni) Strasser of Julesburg, CO. From these children came what she really enjoyed, grandchildren. Brandon (Samantha) Schaffer, Nathan Strasser, Jentry (Jordan) Sonner, Kaylie Strasser, Adam Strasser, Jayce Strasser, Jordyn Strasser, Noah Strasser, Josef Strasser; her late grandson's wife, Sandra Schaffer and one great-granddaughter, Raelynn Sonner, who called her GiGi. Janet was survived by one sister, five brothers and their spouses, nieces, nephews, and their families. She is also survived by her sister of the heart, Diana Cummings. Janet is preceded in death by her parents, Raymond and Evelyn Radke; sister, Karen (Richard) Reiss; brothers, Rodney Radke and Ernie Radke; sister-in-law, Brenda Radke; niece, RaeDee Eddington; and grandson, Justin Schaffer. Janet was a lifelong seamstress. She started at a very young age. Her love for sewing turned into a passion for quilting that many families, friends, and community members benefited from. Her other passion was cooking and baking. The more people she could feed, the happier she was. No one can make mashed potatoes or scratch-made red velvet cake like Janet. Another favorite for Janet was to send cookie care packages to her grandchildren. As a lifelong devoted Catholic, in lieu of flowers, memorial contributions can be made to St. Anthony's Catholic Church of Julesburg, in Janet's memory. Condolences may be shared at prairiehillsjulesburg.com, where the services will be streamed live. Funeral Mass will be Friday, December 10, 2021, at 1:00 pm at St. Anthony of Padua Catholic Church in Julesburg with Father Jerry Rohr as Celebrant. A reception will immediately follow at the Hippodrome Arts Center in Julesburg until 3 pm. Inurnment will be at a later date. Prairie Hills Funeral Home of Julesburg is in charge of arrangements.

Janet Marie Strasser (Radke), 73, of Holyoke, CO, passed away on December 6, 2021, at Melissa Memorial Hospital in Holyoke, CO. Janet was born on December 17, 1947, to Raymond and Evelyn Radke (Lempke). Janet was one of ten children born to... View Obituary & Service Information

The family of Janet Strasser created this Life Tributes page to make it easy to share your memories.

Send flowers to the Strasser family.