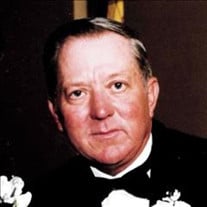 JIM "HIGGINS" PARKER III, 79 of Ovid, CO, passed away Tuesday, December 11, 2018, at his home. James H. Parker III, was born May 27, 1939, at Greeley, Colorado, to James H. Parker II and Luella (Oelschlager) Parker. He attended Ovid schools and graduated in 1957. He graduated from Colorado State University at Fort Collins, in 1964, with a degree in Animal Science. In the same year, Jim married Janet Tombaugh, who came to Ovid to take a teaching position. When there were 3 living James H. Parkers, Jim was known as young Jim, then later, Jimmy to differentiate between the 3 relatives with the same name. Finally, we referred to Jim's father as Big Jim, and Jim became just Jim, but some people always called Jim by his middle name "Higgins." Jim grew up on the family ranch south of Ovid, and has always known ranching as his life. Jim was in the Colorado National Guard from 1963 until 1967, at which time he was given a medical discharge due to extensive injuries incurred in a ranch accident. For a number of years, Jim rode in the Pony Express runs. Occasionally, he rode in parades and entered horse races at the fairgrounds. Jim is survived by one son, Jesse J. Parker, and 2 grandsons, Beau James Parker, and Brody Lee Parker. Jim was preceded in death by his mother and father, Jim and Luella Parker. Memorials are suggested to the Ovid Fire Department in Jim's memory. Condolences can be shared at prairiehillsjulesburg.com. Funeral services will be Monday, December 17, 2018 at 10:00 AM at Prairie Hills Funeral Home in Julesburg, CO with Pastor Art Roth officiating. Burial will follow in the Ovid Cemetery. Visitation will be Sunday, December 16th from 2:00 PM to 6:00 PM at the funeral home. Prairie Hills Funeral Home of Julesburg, CO is in charge of arrangements.

The family of Jim "Higgins" Parker III created this Life Tributes page to make it easy to share your memories.