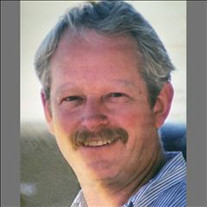 JAMES "JIM" "SKIP" MCNITT, 62, of Julesburg, went home to our heavenly Father on May 21, 2021, in Connecticut. Jim was born May 11, 1959, in Stanley, Wisconsin, to Warren and Judith (Berseth) McNitt. He graduated from Longmont High School with the class of 1977. In February of 1978, Jim entered the U.S. Navy where he served on the submarine "USS Robert E. Lee". He was stationed in Hawaii. Jim was honorably discharged in February of 1981, completing his service as a Nuclear Missile Technician. Jim went to work for Storage Tech Incorporated, where he worked on computers for several years. On June 21, 1986, He married Kim M. Lingen at Great Falls, Montana, and their union was blessed with three children, Clayton, Clyde, and Hannah. The couple lived in Houston TX, Great Falls MT, Bountiful UT and eventually made Colorado their home in 1988. The family moved to Crook in 1992 where he established his first business "Jim's Auto and Marine". The family landed in Julesburg in 2007, where they purchased the old John Deere building and established "Great Planes Aviation". Jim (a real MacGyver) was a master mechanic. He liked to work and could fix anything that was broken including Cars, boats, airplanes, helicopters, etc. You name it he could fix it. His career as an aviation mechanic (A&P, I.A.) was a fulfilling one having restored over 130 airplanes. He had an endless curiosity for life and filled his shop with not only friends, but all kinds of things that interested him including a 14' tall elephant. Jim was a man of quiet faith that worked hard for what he had. He was generous and cared about others. He spent a good bit of his time on the phone helping friends. He had an endless thirst for knowledge. He was a man of many projects. Roadtrips to fetch the next project were always filled with adventure and repair. In the end, our lives rarely take the shape we plan for but are rather the path that God lays out for us. We love you Jim. Thank you for sharing your amazing journey with us. Jim was preceded in death by his father, Warren Lane McNitt, and two brothers, Richard and Lee McNitt. Survivors include his wife, Kim of Julesburg; three children, Clayton McNitt of Fort Collins, Clyde McNitt of Ovid, and Hannah (fiance, Adam Hewgley) of Alliance, NE; granddaughters, Aleia and Amariah; grandson, Joseph; mother, Judith McNitt of Madrid; 2 brothers, David McNitt of Mexia, TX and Lane (Peggy) McNitt of Seattle, WA; along with many nieces, nephews, other relatives, and friends. A memorial has been established in Jim's memory for later designation. Condolences may be shared at prairiehillsjulesburg.com, where the service will be streamed live for those unable to attend. Funeral Services will be Saturday, June 12, 2021, at the Julesburg Christian Church at 10:30 am. Burial will be in the Madrid Cemetery. Prairie Hills Funeral Home of Julesburg is in charge of arrangements.

JAMES "JIM" "SKIP" MCNITT, 62, of Julesburg, went home to our heavenly Father on May 21, 2021, in Connecticut. Jim was born May 11, 1959, in Stanley, Wisconsin, to Warren and Judith (Berseth) McNitt. He graduated from Longmont High School with... View Obituary & Service Information

The family of James B McNitt created this Life Tributes page to make it easy to share your memories.

Send flowers to the McNitt family.