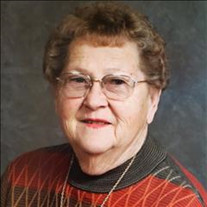 IRENE "TINY" LANCKRIET, 91, of Julesburg, Colorado, passed away October 29, 2020, at the Northern Colorado Medical Center at Greeley, Colorado. Irene was born March 31, 1929 at Toledo, Ohio to Frank J and Katherina (Lechman) Frank. Her parents were part of the Germans from Russia immigration. Relatives still remain in Warburg, Germany. Irene was the youngest of 12 children. The first child, an infant girl died shortly after arriving to the USA. The young couple arrived at Ellis Island, starting their journey across the country working on farms of family relatives or friends. The young family lived in Topeka, Kansas; Montrose, Colorado; Monte Vista, Colorado; Milwaukee, Wisconsin; Topeka, Kansas; Sterling, Colorado; Olivia, Minnesota; Montrose, Colorado; Chicago, Illinois; and Toledo, Ohio before making their home south of Big Springs, Nebraska. Irene's older sister Mary's "job" was to take care of the "Tiny" baby while Katherina was busy running the household. Irene went to a small country school during the lower grades. She graduated from Big Springs High School. She spent a little over a year as a nanny in Denver. She returned to Big Springs when the country teacher left. She became the teacher in that one room school house for a number of years. She used her Dad's (Frank) pickup to drive around the neighborhood picking up her students, many of which were her nieces and nephews. Education was always very important to Irene. Her pride was evident when Granddaughter Micaiah began her teaching career in Haxtun, Colorado. Irene met Henry Lanckriet through her brother Frankie, who dated and married Henry's sister Margaret. Irene was engaged on Valentine's Day. She asked Henry only one question before she said yes. When was she going to get the rest of the ring set? On April 11, 1950, Irene married Henry A. Lanckriet. For the first two years, the couple lived south of Big Springs, Nebraska about 1 1/2 miles from where she was raised. Their union was blessed with three children, Diana, Kevin, and Eric. The family made their home on the Renee and Catherine Eeckhout homestead south of Julesburg, Colorado before purchasing the farm. Irene ran the household with efficiency and hard work. Selling eggs, butter to the grocery store. Sending cream and milk to LaSalle, Colorado every week on the train. Driving truck during harvest. She always had a 3 course Breakfast, 5 course Dinner and Supper ready for the table. Feeding from 5 to 18 people per meal. German specialties from her heritage were the staples. Irene and Henry were active and foundation parishioners of St. Anthony of Padua Catholic Church in Julesburg. Henry hauled wood from LaSalle and helped with construction as Irene cooked meals for the men working on the church. Irene and Henry were supportive of their Grandchildren's activities: Aaron and FFA; Micaiah and Kaleb's ball games. Great-granddaughter Tiffany's 4-H cattle and horse projects, traveling when possible around the area to watch the competitions. Irene was a gifted and tireless seamstress. She owned and operated Irene's Sewing in downtown Julesburg for many years. After she retired from the store, she continued to sew privately from the farm. She remained very active with her sister Barb Macht and sister-in-law Arline Lanckriet making quilts for ABC Babies, also Ditty Bags for the Denver Missions. People from Julesburg and beyond would give the trio the soaps, shampoos, etc. from their motel stays to use in the Ditty Bags. Irene was preceded in death by her parents, 11 siblings, husband Henry, Step-Granddaughter Ashley Evelyn. Survivors include her children, Diana Cumming; Kevin (Terry) Lanckriet; Eric (Peggy) Lanckriet. Grandchildren: Aaron & Juby Cumming; Micaiah Lanckriet; Kaleb Lanckriet. Step-grandchildren: Zach & Kristian Evelyn; Lacee & Dan McKay. Great-grandchildren: Tiffany Cumming; Anders, Rafe, Liam, and Piper Buettenback. Step-great-grandchildren: Dustin Baker; Riley (Alex) Smith; McKenna, Madison, and Miles Evelyn; Trinity Weiss. Along with many other relatives and friends. Memorials are suggested to St. Anthony's Catholic Church of Julesburg in Irene's memory. Or charity of your choice. Condolences may be shared at prairiehillsfuneralhome.com. Memorial Mass will be held Saturday, April 10, 2021, 10:00 a.m. at St. Anthony of Padua Catholic Church with Fr. Micheal O'Brien as Celebrant. The Rosary will be recited at 9:30 a.m. on Saturday at the church. Inurnment will be in the Julesburg Hillside Cemetery. Prairie Hills Funeral Home of Julesburg is in charge of arrangements.

The family of Irene Lanckriet created this Life Tributes page to make it easy to share your memories.

Send flowers to the Lanckriet family.